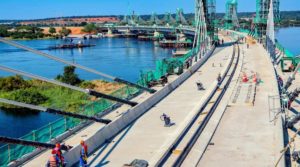 So many border posts in Africa and around the world are places to avoid, yet there are some that are worth visiting and not just to get to the other side. Yes the Kazungula border is still somewhat chaotic and if you are a truck driver you may have had to spend a week at this border waiting your turn to cross over between Zambia and Botswana, or vice versa, using one of the Ferries on offer. These ferries could only carry one truck at a time.

This is all about to end – yes this border post was identified as a key link in the infrastructure of the Zambesia region in Africa, linking trade from the South with that of the North. The border is actually the meeting point of four countries – yes four of the seven countries of Zambesia share a common boundary at Kazungula. Namibia, Botswana, Zimbabwe and Zambia. We stand to be corrected but we believe this is the only point in the world at which four countries actually meet.

The Kazungula Bridge project began in October 2014 and is a partnership between Zambia and Botswana. The bridge has a railway line that will link the Msetse and Kazungula lines. It is almost 1km long and 20 meters wide. The bridge once completed will have cost in the region of 300 million dollars to build and is being financed through a Japanese funding agency and the African Development Bank. The leading contractor is Daewoo Construction, believed to be a South Korean company.

This bridge will be a welcome development to the region as it will obviously see the faster movement of cross border trade. It will see less truck traffic having to use the Victoria Falls Bridge. It will also see an improvement in the fortunes of the businesses set up on either side of the border.

For tourism the name and place Kazungula has a meaning too. It means small Sausage Tree (a wonderful tree with large sausage like fruit found in the area) Many of these trees are to be found not far from here. Of most importance though is the fact that this border links the Victoria Falls from both Zambia and Zimbabwe with the Chobe National Park in Botswana. Yes, just a one hour coach ride will now see you travel between these two iconic spots on the African Continent.

Roll on the completion of this massive bridge!