Shongwe Lookout, a 23-bedroomed lodge in the suburbs of Victoria Falls, was opened by the His worship the Mayor, Mr S. Dhlamini, in a ribbon cutting ceremony.

The Mayor said the opening of the new lodge showcased the exciting future ahead for Victoria Falls, and the continued investment into the town.
Shongwe Lookout, unique for its two-storied lookout tower with views of the Zambezi River and Victoria Falls spray, cost USD$1.5 million to build.
Manager Jamie Henson said building over the past nine months had been a challenge, but already the lodge had close to 50 per cent occupancy for the next few months, with plenty of bookings rolling in for 2020 and 2021.

“We are really pleased with the reservations coming in,” he said.

“They indicate that tourism remains strong for Victoria Falls, and that this town is a great place to invest.”

Shongwe Lookout was designed and built to showcase as much of Zimbabwe’s artisan talent as possible, said Mr Henson.

“Wherever we could we went local. For example, all of our timber was sourced from local teak and manufactured locally by The Woodfactory.”
“There is incredible talent in this country, and it is a privilege to be able to support and showcase it.”

The lodge is located 1 kilometre from town and 2 kilometres from the world-famous waterfall for which the town is named. It offers a restaurant area, a bar, an outdoor infinity pool and a firepit as well as fully furnished rooms. 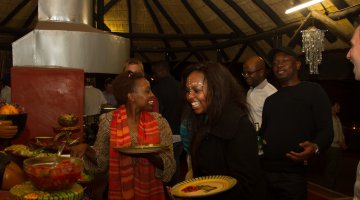