THE war on poaching in the Victoria Falls region has been given a $24,972 boost by an annual fundraising golf tournament, coordinated, hosted and sponsored by Zimbabwean hospitality group Africa Albida Tourism.

A record field of 164 players, making up 41 teams, teed off for charity at the 17th annual fundraising golf day for the Victoria Falls Anti-Poaching Unit (VFAPU) at Borrowdale Brooke Golf Club on September 22, before a prize-giving function and auction.

The tournament, which was played in a Fourball Alliance Stableford format, was won by the Stanbic team, made up of John Maonga, Mike McMullen, William Satade and Kudzanayi Nyoni, who finished on 115 points. Teams All Blacks and Zipington tied on 111 points to claim third place. 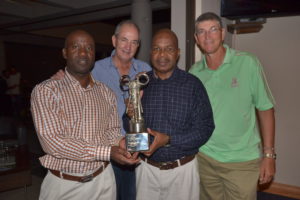 Second prize and third prizes were accommodation vouchers for Victoria Falls Safari Lodge and Davison’s Camp in Hwange National Park, and for self-catering accommodation at Hornbill’s Haunt and Plover’s Pad in Kariba, and Lokuthula Lodges in Victoria Falls.

Three items of cricket memorabilia, donated by SAVE African Rhino Foundation, and two travel packages fetched a total of $7,450 at auction, with a six-night self-drive package for two staying at The Hide in Hwange, Changa Safari Camp in Kariba and Victoria Falls Safari Club attracting the highest bid of $3,600.

Africa Albida Tourism (AAT) chief executive Ross Kennedy said: “The success of the 2017 VFAPU Golf Day was remarkable! In a seriously challenging and difficult economic environment the commitment and energy shown by all was simply wonderful to witness.

“It was the biggest field ever, with 41 teams playing, and more than 40 sponsors and donors, reflecting the importance that our society places on conservation and wildlife in Zimbabwe,” Mr Kennedy said.

“Once again, we express our huge thanks to all who were involved in making it such a successful day,” he said.

VFAPU head of operations Charles Brightman applauded the fantastic effort and thanked everyone involved, saying the funds raised would go a long way towards covering the unit’s operational costs.

VFAPU’s 17 scouts, who tackle all forms of poaching in the Victoria Falls region, have arrested 720 hardened poachers since the unit was established in 1999 by Mr Brightman, a professional guide and conservationist, and Victoria Falls Safari Lodge, AAT’s flagship property.

The unit, which works closely with the Zimbabwe Parks and Wildlife Management Authority and the Zimbabwe Republic Police, has also removed more than 22 000 wire snares from its operational area so far, and rescued 200 mammals injured by snares.

For more information visit www.vfapu.com or to donate contact Mr Brightman on csb@zol.co.zw

Next post Lubango - A place to relax in Angola