Heartwarming story of intern to management

Children in the Wilderness (CITW) has as its overall goal to facilitate sustainable conservation through leadership development of rural children in Africa. This is achieved in a variety of ways, from running three- to five-day camps at Wilderness Safaris camps, to running Eco-Clubs and Follow-up Programmes at schools, within the rural communities that live on the edges of the wild areas of Africa.

One of the Children in the Wilderness participants who was involved in her local Eco-Club and CITW camps, Stella Mwale volunteered as an Eco-Mentor at a CITW camp at Kalamu in May 2012 . She shone at camp, and the camp manager of Kalamu offered her a job. She worked at Kalamu Lagoon Camp and helped in different departments, from staff chef to scullery and housekeeping. She is now at Lufupa Camp as a trainee Camp Manager.
Stella is a shining example of the positive influence that our camp programme has on both children and Eco-Mentors.
To read more of our heartwarming Where are they now? stories at, where are they now

The creation of Children in the Wilderness was an organic evolution of the vision of Wilderness Safaris, which has always been that we need to face the challenge of Africa’s wildlife areas being under severe pressure – indeed, the areas in which Wilderness Safaris operates are some of the planet’s more sensitive and fragile environmental hotspots. Therefore, by focusing on children, Children in the Wilderness believes that a programme of this calibre can impact significantly on the local communities in the hope of securing the future of these fragile areas.

Since running its first camp in Botswana, Children in the Wilderness has expanded its operations to seven of the countries in which Wilderness Safaris operates: Botswana, Namibia, Malawi, South Africa, Seychelles, Zambia and Zimbabwe. With the right sponsorship, the programme has the potential to grow and make a huge contribution to the sustainability of Africa’s people and parks.

Tags: children in the wildernessconservationStaff Training in Africa 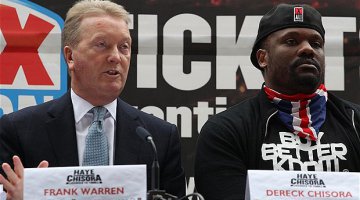 Controversial Zimbabwean Boxer Derek Chisora is due to fight Haye