Tourism Industry Welcomes The Relaunch of the Kaza Visa

The relaunch of a univisa between Zimbabwe and Zambia has been hailed “a positive step” and “a wonderfully important Christmas present to tourism in both countries” by industry leader Ross Kennedy.

The KAZA visa, which means tourists only need to obtain one visa to visit Zimbabwe and Zambia, was re-launched by Zimbabwean Home Affairs minister Ignatious Chombo and his Zambian counterpart in a ceremony in Livingstone today. 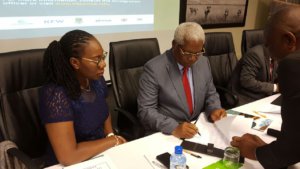 Mr Kennedy, African Travel and Tourism Association chairman and Africa Albida Tourism (AAT) chief executive, said the relaunch was a positive step for the tourism sector in both countries, as tourism was such a powerful economic driver for each.

“The relaunch of the user friendly KAZA visa between Zimbabwe and Zambia is a wonderfully important Christmas present to tourism in both countries,” said Mr Kennedy.

“The original trial year was a major success and was embraced and supported by travel agents and tour operators across the world,” he said.

“This is now phase 2 of the plan, following the pilot scheme from November 2014 to December 2015 when 50,000 visas were issued. Phase 3 will include Angola, Botswana and Namibia.

“Following this, it is planned and hoped that SADC will embrace the scheme,” Mr Kennedy said.

“At AAT we will be telling the tourism world of this important and positive step, coming so soon after the commissioning of the new Victoria Falls International Airport, and the announcement by Ethiopian Airlines to fly into Victoria Falls four times a week from March next year.

“This new visa regime is an early step in exploring and developing the KavangoZambezi (Kaza) Transfrontier Conservation Area as a tourism zone with Victoria Falls as its hub,” he said.

The KAZA visa, which costs $50 and lasts for up to 30 days, is expected to save visitors, from 65 countries – including the United States, Australia and the United Kingdom – both time and money.

The univisa, which was made available with immediate effect, is now expected to become a permanent scheme, and in the future will be obtainable at all ports of entry and also online.