My Mana Pools, My Heritage

Finding myself working for Wilderness Safaris in Zimbabwe’s Mana Pools seems less by coincidence than by appointment at the right time as my forefathers lived in the area around Mana Pools long before it was inscribed as a UNESCO Natural World Heritage Site in 1984. My father was born somewhere in the Zambezi Valley in 1922 and lived here with his parents until they were moved out and settled in the Hurungwe area as chief and headman in the new area. The chiefs then were Mudzimu, Dandawa and Nyamhunga.

Every time I make it down the escarpment from Makuti I have a sense of homecoming. This is what makes my time at Ruckomechi Camp so special because I feel the reconnection with my ancestors. Evidence of their existence is all around as I drive here; the huge open areas tell of evidence of a life gone by, with signs of pottery and pole-and-dagga (mud) huts, though the best of all are the hollow baobab trees which tell long stories of their existence and how they were used to hide from invaders and later on as storerooms for grain.

Across the river on the Zambian side are families who speak my language – and we are, in a way, related as most of them moved across the Zambezi River before borders and passports came into being. During the time my forefathers were here they mainly survived on fishing and growing small grain crops like sorghum and rapoko grass. As I drive around Mana Pools National Park my mind is taken back many years and I try to imagine how life was back then, mentally rewinding the clock to put together a picture of those historic days. Some areas are still steeped in myth and mystery – like the gravesite of one of the earlier chiefs that on days can be seen and other days just vanishes into thin air! The rivers flowing around Mana Pools still bear the names given to them by my ancestors and each name has a story and history related to it; so too the mountains and the hills around here. 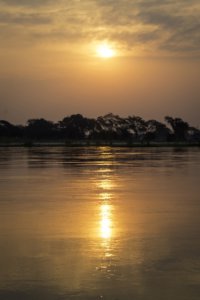 Life may have evolved a hundred-fold but the history and evidence of my ancestors’ survival I will always cherish and pass on to my people – and continue to respect our legacy which is this extraordinary place and its amazing animals.

Botswana’s future depends on the protection of its wildlife