Riding for Rhinos Raises Funds For Save The Rhino Trust Namibia

Now in its second year, the RMB Namibia Ride for Rhinos fundraising cycle event took place from 1 to 4 September 2016, encompassing 160 km of vast and rugged Palmwag terrain in Damaraland and raising over NAD200 000 for Save the Rhino Trust (SRT) Namibia.

Wilderness Safaris Namibia has been involved since the event began last year, assisting with route mapping and providing most of the vehicles, a small truck, some operational support and a private chef to cater for the group. Wilderness Safaris Desert Rhino Camp, which operates in close partnership with SRT, was proud to host the cyclists on their last night of the ride.

Desert Rhino Camp is a joint venture between Wilderness Safaris, SRT, and the nearby community conservancies of Torra, Sesfontein and Anabeb with a portion of guests’ nightly rates directly funding black rhino monitoring and various other conservation activities in the region. This collaboration is instrumental in many conservation successes in Damaraland’s remote and harsh environment, most notably a healthy growth in black rhino population over the past three decades.

Fourie explained that the event was more of a nature experience than a race, comprising 20 riders, from novices to very experienced riders published here.

Aimed at influential Namibians, the exclusive RMB Namibia Ride for Rhinos would not be possible without significant contributions from Venture Publications and Wilderness Safaris, as well as RMB Namibia as the title sponsor. Other generous sponsors for the 2016 event included the Cymot Group and the Pupkewitz Group, both of which provided essential equipment for the cyclists. 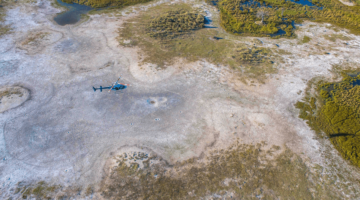