Friends Of Hwange Churning Out The Water Works

Six new boreholes have been drilled, two old ones ﬂushed, and 13 new solar pumping units have been installed this year, some on old boreholes and some on the new ones. Helped by lovely late rain in April and May, most pans are holding really good water and are looking picture-pretty.  Kennedy 2 Pan has given us cause for concern for ages, with much erosion and convoluted digging from the borehole outlet to the pan thanks to the “mining exploits” of numerous elephants.

African Bush Camps has recently made use of a bulldozer to ﬂatten it all out, and we have drilled another borehole there. A new solar unit will be erected on this hole very shortly, and together with the upgraded old solar pump this should do much to boost water levels in the pan.

We were delighted last week to feast our eyes on the sight of numbers of impressive elephant bulls visiting the “bar” at K2, to rest and relish the cool, fresh water, and to bathe and wallow in the mud.   We have some way to go before our quest to ‘solarize’ all the pans in and around the Main Camp area is complete. Five new boreholes, and six new solar pumping units are still needed.

We have also undertaken to fund a new borehole at Masuma in the Sinamatella region, as it is such a key pan, and a second borehole at Deteema Dam where herds of two thousand buffalo, hundreds of elephant and countless other smaller creatures are already drinking daily. The unit there is a hybrid, which means it pumps water using solar energy by day, and is boosted with a generator at night, but it is still unable to cope with demand.

The toil and labour of ensuring  sustainable water supply for game is one that never ends. The amount of water that is available at the moment is encouraging.  However it remains to be seen how the units cope during the intense heat and dry conditions which will be prevalent in the coming months.

To find out more about Friends Of Hwange Trust follow this link friendsofhwange.com 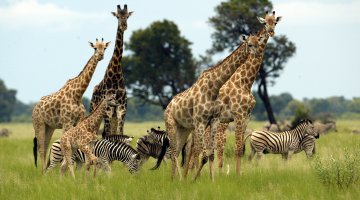