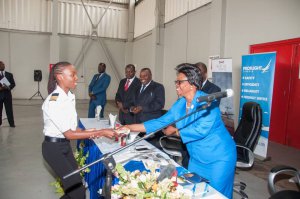 At just 19 years of age, ambitious teenager Besa Mumba has just secured her dream job as a pilot flying with the nation’s scheduled airline, Proflight Zambia. The airline’s newest and youngest pilot, Besa Mumba, was congratulated by First Lady Esther Lungu last week at the launch of the Zambian chapter of the Women in Aviation movement.

Nineteen-year-old Ms Mumba who has just embarked on her flying career, also came face-to-face with industry stalwart Yichida Ndlovu, the nation’s first Zambian female pilot, and Colonel Nina Tapula, the first woman pilot in the Zambian Air Force (ZAF). The bold move makes Ms Mumba the country’s youngest commercial pilot and a role model for women across the world, as well as cementing Proflight’s positon as a champion of training and nurturing young local talent.

“Curiosity made me venture into an aviation career. Initially I wanted to be cabin crew but I thought to myself: ‘why not be the person who flies the aircraft?’ From then I had questions on how planes fly, how they moved in the sky and I wanted to know how pilots knew where they were and where they were going. My curiosity grew,” said Ms Mumba.“That’s why I decided to venture into the aviation as a pilot. I am very blessed, and proud to have had the opportunity to go to flight school to study and become a pilot,” she said.

She was employed by Proflight Zambia as a First Officer this month and she has already flown more than 15 hours, on Zambian domestic routes to Kasama, Lower Zambezi, and Luangwa.

“Proflight Zambia was impressed with Besa’s determination and drive and we believe she has the will to succeed in what is very competitive industry,” said Proflight’s Director of Government and Industry Affairs Capt. Philip Lemba. “We will support Besa all the way, and look forward to her growing her career with us.”

A vibrant and intelligent young woman, Ms Mumba looks forward to inspiring more women to take up flying as an attainable lifetime career. 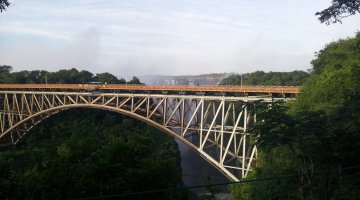