Rhino war: Acknowledging those in the battle front

The Rhino conservation awards which have been held annually since 2012, serve to recognise the individuals and organisations that fight to protect Africa’s remaining rhino population. This year’s ceremony was held at Montecasino in Fourways on the 11th of July 2016. Founders Dr Larry Hansen and Miss Xiaoyang Yu, with sponsors Carl Zeiss Sports Optics, presented the awards in collaboration with the South African Department of Environmental Affairs and the Game Rangers Association of Aftica (GRAA).

This year, nominations were received from across the African rhino range states, and the quality and emotive value of these selections illustrated the quality of the contribution from these individuals and organisations.

Accounts of rangers being killed in the front lines have become increasingly common due to the perils which come with the territory. Reports of this nature have brought to light the reality of the dangers that rangers face daily, and the immense sacrifices that they make to protect a species on the brink of extinction.

According to Oxpeckers’ Associate and Administrator of the Game Rangers Association of Africa (GRAA), Louise de Bruin; “Game rangers choose a life that is often in the most remote wilderness, where communication is minimal and resources are scarce, to dedicate themselves to Africa’s natural resources. Family life and luxuries are usually sacrificed in their efforts to protect a natural heritage that is fast depleting.”

“The role of an African game ranger today is far removed from what it once was. Previously, game rangers spent most of their time involved in conservation tasks and ecological management. While these duties are still required today, the anti-poaching war often consumes the majority of their time,” confirms De Bruin. “Throughout Africa, rangers are up against crime syndicates that equip poachers with dangerous weaponry used in modern warfare, such as hand grenades, rocket-propelled grenades (RPG-7s) and AK47s – and most poachers are prepared to kill anyone who stands between them and high-value items such as rhino horn and ivory.”

This positive notion enshrined in the awards, comes at a time when the battle against poaching is at an all-time high. It is imperative that we acknowledge and recognize the combatants. These hardy individuals, who risk life and limb, fight a battle which many of us cannot fully comprehend. Initiatives such as this will go a long way, reminding the rhino warriers that their sweat and blood does not go unnoticed; encouraging them to keep fighting on. 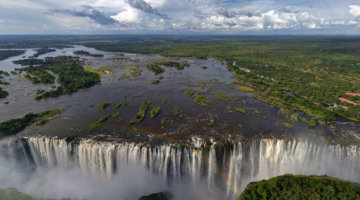 How To Invest Locally In Victoria Falls