Its been a while since we drove from Vic Falls to Francistown, so we decided to escape the office and take a few days out. 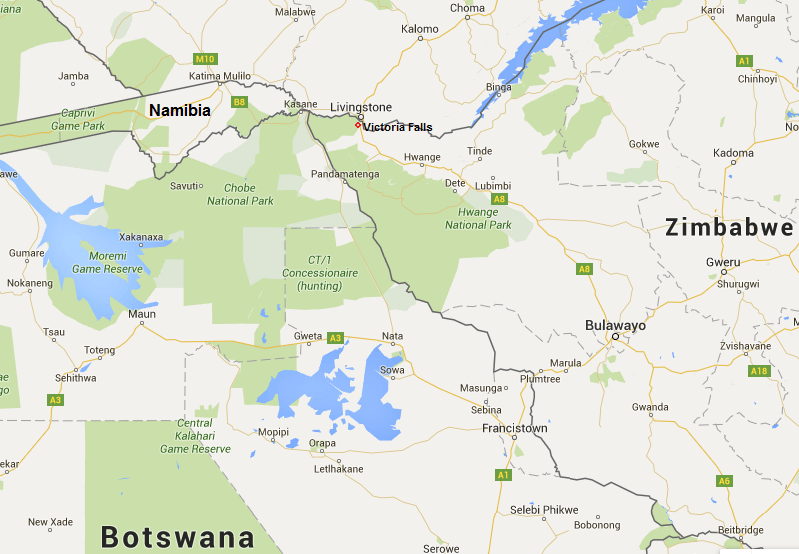 Its about 500 kilometres so we opted to take it easy and break the journey at Nata.  Nata Lodge is situated on the Makgadikgadi Salt Pans,making it a central stopping point for anyone wishing to visit the vast pans and national parks in the area.  We left Vic Falls at 3 pm, cleared the Kazungula border by 4.30 pm and were on our way towards thunderous dark skies and a wide empty road. We had barely left the Kasane town limits when the rain started.  Great fat drops, lightning and thunder – utterly glorious !  There has been quite a bit of rain in the area as there were still large pools of water on the roadside and in the surrounding bush.  Every year it astounds us how the bush can transform from a seemingly lifeless dust blown landscape of dry sticks and exposed earth, to a lush verdant paradise after just a few good storms.  The wildlife celebrate the rains too, with big herds of zebra, kudu and impala, sounders of warthogs, and elephants so numerous they became as common as cows or donkeys on an African roadtrip.  Another special and frequent sighting were the herds of wild horses, grazing with their foals on the sweet green verge grass.  Not much is known about these horses, apart from that they may have originated from Namibia, their original ancestors being the cavalry horses of the German army during World War One. The incessant heavy rain continued until well after Pandamatenga, making photos impossible, but the sight of happy, dark, wet elephants blissfully gorging themselves on the new green leaves is a special memory for us.

We arrived at Nata just as the sun was setting, and discovered it has grown almost beyond recognition since our last visit.  New garages, new shopping centre, new B & B’s and lodges, it was remarkable.  Shortly after our last stay at Nata Lodge years ago, a fire swept through the establishment causing extensive damage.  We were excited to see the new and improved structure.  Great to see the lodge full of tourists, from all over the world, en route to exciting safaris or just self drives enjoying what Botswana has to offer.  The Nata Lodge staff were so friendly and welcoming, and soon had us relaxing with a delicious ice cold St Louis whilst we quickly caught up with the all important Cricket Test match score.  As we were tucking into a substantial dinner we had an interesting visitor 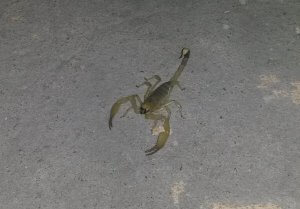 Possibly the largest Buthidae Scorpion we have encountered in a very long time, measuring in around 15 cm in length.  Not wanting to test his temperament he was rapidly escorted outside to a more suitable hunting ground.

The chalets at Nata are wooden and raised up on stilts, looking out onto a riverbed and the bush. There are 22 luxury chalets, 10 luxury custom-designed en-suite Meru style tents,  and camping facilities.  The pans are a birders paradise, particularly at this time of year as the migrants arrive in force to enjoy the pans filling with water.  If you aren’t much of a Twitcher, then the game viewing is also great, either on a scheduled game drive from the Lodge, or simply explore in your own vehicle. 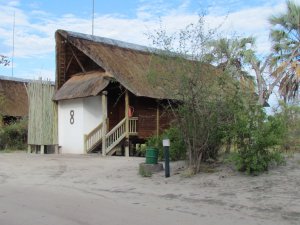 After a substantial breakfast we were on the road again, destination Francistown.  The roads are generally good the whole way, a few potholes here and there, but large sections have been resurfaced and are in the process of being marked.  It is a general rule that you simply do not drive these roads in the dark, and this is still highly recommended.  From Kasane to Pandamantenga there are wild animals to be careful of, and from thereon there are donkeys,cows and carts.  Break your journey accordingly and enjoy touring Botswana in daylight. 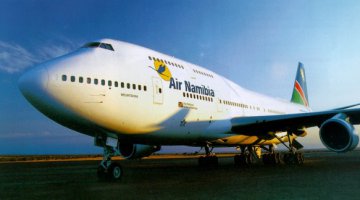