In a balanced and positive independence speech to the people of Botswana, the president of that country Ian Khama suggested to the nation that they wear Botswana National Colours each Friday, in the run up to their 50th anniversary of independence in 2016.
Botswana became independent from Britain on the 30th of September 1966. The country is one of Africa’s real success stories having seen the steady development of the country’s small economy. Tourism is extremely important to Botswana as it employs a large percent of the working population of that country. At the very heart of this tourism is the wildlife and nature that Botswana has been so good at utilising in a sustainable manner over these years.
The country is home to one of the largest populations of Elephant on the continent. The Okavango Delta is often heralded as the leading natural inland delta in the world with fresh water clean from pollution supplying a natural irrigation scheme to an incredible wild area of Southern Africa. The area so large it can be seen to stand out Green, from the dry region around it when viewed from space.
Indeed the people of Botswana have a lot to celebrate.
In closing his speech wishing the people of Botswana a safe and enjoyable 49th Anniversary he ended with the word PULA – this is both the Botswana currency but also is the local term for Rain, something that in Botswana is often in short supply, and so encouraging all Botswana people to pray for a good rainy season ahead. 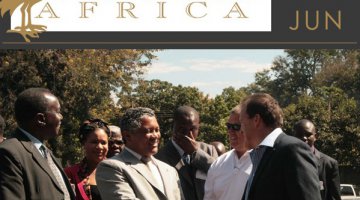