Hot Air Balloons take off in the Okavango 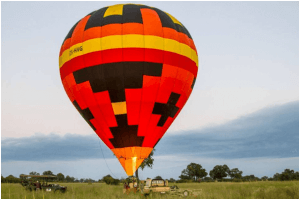 Long-time hot air ballooning company Air Ventures has opened a new business in partnership with a local company in Botswana. The new company is called Air Ventures Okavango Balloons. This company has conducted its first few flights over the Okavango Delta.

Air Ventures has been operating for years in South Africa where it conducts hot air balloon rides in the Magaliesburg area as well as over the Pilansburg National Park which is adjacent to the well-known Sun City resort.

The first commercial flight in the Okavango delta took off on the 28th of August from Kadizora Camp which is situated in the extreme south of the Okavango region not far from Maun. The camp is outside of the Moremi Game reserve however the game sightings in the entire Okavango region are prolific.

Generally hot air balloon flights take off in the early mornings as close to or before dawn. This means that the air is cooler and there is less likely hood of winds and air currents. It is also expected that the dryer months will be targeted for this product.