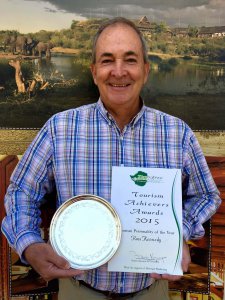 AFRICA Albida Tourism chief executive Ross Kennedy has won a prestigious Zimbabwe Council for Tourism award, in recognition of his outstanding contribution to the growth and development of this country’s travel and tourism sector.
Mr Kennedy was presented with the Tourism Personality of the Year Award at the Zimbabwe Council for Tourism (ZCT) Harvergal Marketing Tourism Achievers Awards 2015 dinner by Deputy Minister of Tourism Walter Kanhanga at the Meikles Hotel on Friday night.
Mr Kennedy, who is also chairman of the African Travel and Tourism Association (ATTA), and has been a leading figure in Zimbabwe’s tourism industry for more than three decades, said receiving the award was a great honour.
“Being recognised by ones professional peer group is always the finest tribute, and I am sincerely humbled. The team we have at Africa Albida Tourism make my role so much easier and this allows us to have big ambitions and set greater goals, not only for ourselves, but for the tourism industry.”
In his acceptance speech, an emotional Mr Kennedy said the job of promoting Zimbabwe was made so much easier by the fact that it was such an incredible country so rich in natural resources.
“Right now and for the last six-and-a-half years we have also been blessed with a Minister, Deputy Minister and Ministry who are incredibly ambitious, who are dreamers and are all about looking forward,” he said.
AAT group chairman Dave Glynn described Mr Kennedy as “a tower of strength and a just and earnest leader who carries the Africa Albida Tourism and Zimbabwe flag very proudly”.
“We are extremely privileged to have Ross as our leader. I’d like to congratulate and thank him for all he has done for us and for tourism. Well done on being awarded a very worthy accolade,” Mr Glynn said.
ZCT president Francis Ngwenya said Mr Kennedy was a business personality and hotelier, with a record of service to the travel and tourism sector dating back more than 35 years.
“He has been at the forefront of international promotion of Zimbabwe, especially Victoria Falls, and has been active in public affairs in the sector to the benefit of operators throughout the country,” Mr Ngwenya said. 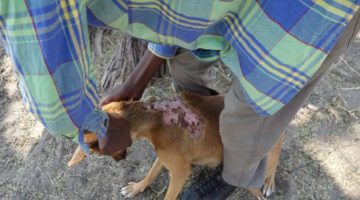