Best Places to Hike in Africa 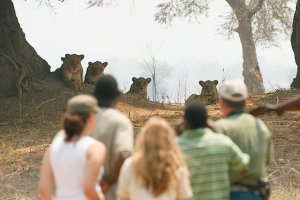 Mana Pools National Park, Zimbabwe
Mana Pools National Park is a World Heritage Site covering 50km along the banks of the Zambezi River in northern Zimbabwe. In the dry season May to November the dense congregations of wildlife including elephant, buffalo, hippo zebra, & teeming plains game traverse the floodplain area of Mana Pools foraging for food. In the process they devour or trample the grasslands leaving a perfect hiking area of open woodland, especially the Acacia Albida forests which helped give the park World Heritage status.

The backdrop of the mountains on the northern banks of the Zambezi River in Zambia, form a dramatic landscape as one hikes along the riverine frontage of Mana Pools in the company of a professional walking guide. Zimbabwe’s professional guides are widely regarded as the best in Africa because of their rigorous training and difficult examination process and their experience in a ‘Big Four’ National Park like Mana Pools. That’s what makes this Park one of the best places to hike in Africa.

A typical ‘Mana shoreline” walking safari is 4 days and 3 nights and your mobile tented camp is moved every night to different areas of the National Park. The Zambezi River is the fourth largest in Africa and nowhere has better game viewing on this River than at Mana Pools. There are excellent predator populations of lion, leopard, hyaena, Painted Dog, and occasionally cheetah as well. Prolific birdlife abounds numbering 400 species including many raptors such as four species of Vulture, Marabou stork, Fish eagle, Bateleur & Martial eagle.

Just 50km to the south against the Zambezi escarpment and the southern boundary of Mana Pools, lies Chitake Springs. This natural spring is the only source of water in the dry season and the predators especially lion, leopard, hyaena and wilddog lie in ambush for the herds of buffalo, impala and other plains game who are forced to drink here. The savannah here is comprised of thick jess bush and undulating ground around Chitake, perfect for camouflaging predators.

While hiking in Chitake (no game drives are allowed) there is every chance of seeing a live kill and the area is regarded as one of the wildest wildlife viewing areas in Africa. Once again having a professional guide to lead you around this area makes for a thrilling and rewarding experience!

Fish River Canyon, Namibia
At a depth of 550 metres, the Fish River Canyon is the second largest canyon in the world and the largest in Africa. Majestically meandering its way in the south of Namibia the canyon is over 160km long cutting a gorge deep into the dry, rocky plateau.

At the lower end of the Fish River Canyon one can recuperate at the Ai-Ais hot springs resort. Another section of the canyon is part of the well known Ai-Ais/Richtersveld Transfrontier Park and attracts the 2nd highest numbers of tourists of any destination in Namibia.

The popular hiking trail generally runs for 88 km of the Fish River ending at Ai-Ais Resort and takes 5 days on average. Good levels of fitness are required as you need to take all your supplies with you including water since in the cooler winter months May – September the Fish River has often dried up. This is the best time to hike as other summer months can be incredibly hot. It is strongly regarded as one of the best places to hike in Africa. 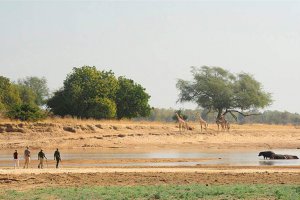 South Luangwa NP, Zambia
The walking safari was pioneered in Luangwa back on the 1950’s and the wide sandy Luangwa River provides an ideal sanctuary of ox-bow lakes and abundant wildlife to enjoy on foot. The difference with game drives is that on foot one becomes part of your surroundings, and you hear, smell and feel the bush as well as see it.

In a fast-paced world, walking with an armed scout and your guide forces you to slow down and enjoy exercising every sense you have in South Luangwa National Park, one of the great Parks of Africa. The Park enjoys all of the Big Five except Rhino, and has the densest population of hippo in Africa.

The lower age limit to walk is 12 years but no upper limit and a high level of fitness is not necessary as walking in Luangwa is done at a slow pace with the camps in the Park offering several tea and drink breaks during walks. Most guided walks are designed to be between satellite bush camps within South Luangwa National Park so the most walking you’ll do in a single day is around 3-5 hours at a leisurely pace and enjoy staying in a different camp each night.

Being one of the best places to hike in Africa, there is no better way to fulfil your sense of adventure or encompass the raw and close up wildlife encounters there are to be had. 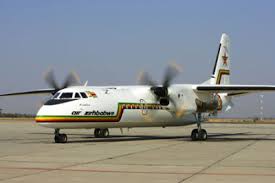