The chief executive of Zimbabwe’s premier hospitality group Africa Albida Tourism, Ross Kennedy, is in Australia to host functions in Melbourne, Sydney and Perth to mark the 20th anniversary of the opening of the celebrated Victoria Falls Safari Lodge.

On Friday evening Mr. Kennedy told a group of travel agents and media guests at a dinner at Melbourne’s European restaurant that Australians had played a significant role in the growth of Victoria Falls Safari Lodge, AAT’s flagship property over the past 20 years.

He said that the Lodge is hugely popular among Australians, with more than 1,000 staying there in 2014, adding that Australia, which is Victoria Falls Safari Lodge’s biggest market after America, is now its fastest growing market, with 10 per cent more staying there every year, he said.

Mr. Kennedy made a point of referring to the way some Australians never stopped visiting Zimbabwe’s tourism regions when they realized that most of them are 700 kilometers or more remote from political centers like Harare. He added, “Certainly, Aussie numbers dropped at times but not to the same extent as traditional visitors from other parts of the world.”

All three experiences can be enjoyed from the Safari Lodge’s timber deck overlooking a busy waterhole that day and night attracts mammals, birds and reptiles from the country’s massive wildlife family 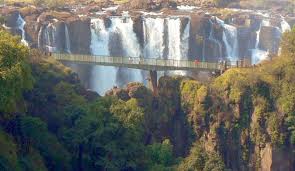