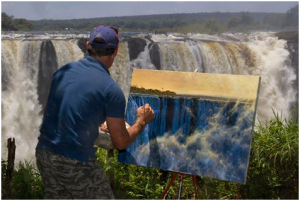 It is no wonder that the little village of Victoria Falls has become home to some of Zimbabwe’s iconic people. The fact that this town is situated within a kilometre of one of the most amazing natural wonders in the world, the fact also that this wonder remains intact and protected from direct modern development is something that would be hard for any nature loving person to ignore, add to this the fact that the Victoria Falls is situated at the epicentre of one of Africa’s most vast wildlife regions.(  A region known in modern tourism circles as the Zambesia Region ). expanding across six international boundaries and includes iconic national parks such as Okavango, Kalahari, Hwange, Chobe, Kafue, Zambezi to name just a few and all of which are within easy striking distance from the Falls You can understand why Norton, a man driven by his passion for nature and his incredible gift of being able to expose this passion on canvas, would want to live here. He can throw his bed roll and artistic tools in the back of his Land Rover and drive in any direction for anything from 30 minutes to two hours and be in some of the world’s iconic Parks.

Larry was once known to sit painting a Baobab tree in Mana Pools whilst a herd of elephant fed from the Albida woodland around him. Not much detracts from his focus when he is at work.

Larry was born in Zimbabwe in 1963 he grew up in the eastern highlands of the country, a region that modern travellers know little about. Listen to him tell you about his escapades in the Chimanimani mountains and you will fall in love with a part of Zimbabwe without visiting it.  He studied applied science in Australia for three years before resigning himself to the fact that an office job was not for him and he would focus on his real talent – Art. That did not stop him from also becoming a raft guide and expedition leader in his youth. He has spent a little time in the wine lands of the Western Cape but always knew he would be back in Zimbabwe soon.

Larry settled back in Victoria Falls in 2008 and established his base there. He has set up his Gallery at the Victoria falls Hotel and he spends his time travelling in the region. He plays an active roll in raising funds for wildlife charities and continues to arrange expeditions to some of Africa’s secret areas.
To learn more about Larry and to look at his art please visit
www.larrynorton.co.za

Previous post Check out to Check in with Proflight 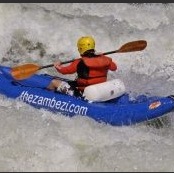