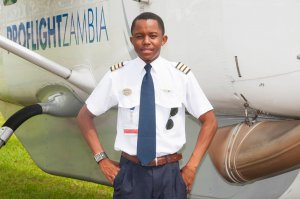 Meet Kalenga Kamwendo, Zambia’s youngest pilot and a proud member of the Proflight Zambia flight crew.
Twenty-year-old Kalenga is a First Officer flying with captains across the airline’s network, having been hired as part of the company’s commitment to support Zambian youth and nurture new local talent.
Kalenga joins an elite team of 36 pilots flying for Proflight on routes from Lusaka to Livingstone, Mfuwe, Lower Zambezi, Ndola, Solwezi and Kasama, as well as Chipata, Mansa and Lilongwe in Malawi.
He joined the airline in September last year, having been given the job on August 26 – his 20th birthday.
Born in Kitwe, the second of three children, his father is an engineer and his mother a nurse. Having studied at Nkana Trust Primary School and Mpelembe Secondary School, Kalenga went straight to the 43 Air School after graduating from grade 12 in 2012.
In one year and three months he graduated with his commercial pilot’s licence, having flown 200 hours and been rated to fly Caravan aircraft.
Since joining Proflight he has now notched-up almost 500 hours of flying time and flown to more than ten destinations on over 100 flights.
It was Kalenga’s parents who encouraged and supported their son’s dream of a career in aviation. He had originally planned to become an engineer, but after hearing that there was a mistaken belief that Zambians could not become pilots, he decided to prove people wrong.
He recalls his first day as a commercial pilot: “I was nervous; I didn’t even have the full uniform. I was flying to Kasama and had to be up at 4hrs.”
But the satisfaction of the job soon came through: “There are tons of thrills, from something as simple as seeing a passenger happy, to the thrill of flying.”
Kalenga draws his inspiration from the colleagues he is working with at Proflight, and in particular is guided by Capt. Vivian Sikazwe, who at 64 is the airline’s oldest commercial pilot.
Fellow pilot, Capt. Josh Mwambazi praised Kalenga’s commitment and explained that Proflight is one of the few airlines in the world where pilots have the opportunity to progress from flying Caravans to twin-engine aircraft in the space of two to three years, and take advantage of the airline’s investment in world-class training for its staff. Kalenga’s CV was one of almost 300 received by Proflight every month, but his attendance at a good quality flight school, along with having the required number of flying hours, tipped the balance in his favour, along with the fact that Proflight actively seeks to recruit Zambian nationals to its team.
Kalenga’s dreams do not stop with flying Caravan aircraft, however, and he has his sights set on the airlines’ lager planes, before one day graduating to fly the world’s largest passenger plane – the Airbus A380. In the meantime, he also plans to attend night classes to gain a degree in business administration.
His story came to light after celebrity Lulu Haangala travelled on one of Kalenga’s flights from Chipata to Lusaka and posted a picture of them together on Facebook and Twitter. Within hours the message went viral as fans commented on how young Kalenga looked – belying his 20 years. Some 11,000 people saw the picture, and before he knew it Kalenga had received 60 Facebook friend requests, along with a number of marriage proposals, he joked.
When he’s not flying he loves dancing, playing football, and also admits to being “a bit of a coach potato”.

Next post Zimbabwean qualifies for Young Chef of the World