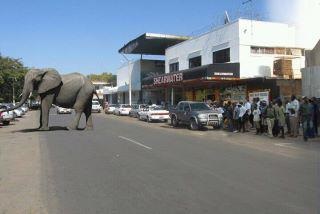 Elephants on the Main Street of Vic Falls

The town of Victoria Falls is inside the Zambezi National Park. It is unusual for a town to be designated within the boundary of a National Park, in this case the town was allowed to develop because of the Victoria Falls Bridge. In the early 1900’s the bridge was the only crossing point between what was then Northern and Southern Rhodesia ( Zambia and Zimbabwe today ). Livingstone which was then the capital of Zambia was developed back from the river and border, some 10 km. Whilst Victoria Falls Town is only half a kilometre away from the border and the Victoria Falls themselves.

The result of this is that the town and its people exists alongside the wildlife. Everyday life in Victoria Falls sees warthogs, baboons, monkeys and Impala literally in amongst the people and traffic. It is also not unusual to see a small herd of elephant, normally bull elephant, right in the town feeding placidly on trees and grass. Locals are so used to these sightings that life continues around them, as if nothing is amiss. Indeed the elephants pose little or no threat to the people as long as a respectful distance is maintained. Both parties seem very aware of this, and so life continues with Elephants and people passing in the streets. This is quite bizarre to many of the tourists who are not so used to greeting an elephant in the street.

Recently the town has had some less common visitors passing through. Whilst Buffalo do live in the bush near the developed areas, in some cases only 200 metres away, it is rare for them to walk into town itself. In this case the Buffalo were chased into town by a pride of Lion. The result was a very jumpy herd of Buffalo ! The local National parks Authorities, together with the Victoria Falls Anti-Poaching Unit, were called upon to warn the local people to be aware of the presence of both Buffalo and Lion on the streets of Victoria Falls.

In general the people and wildlife of Victoria Falls coexist using unspoken rules that have been around for millennia – “Keep your distance from and respect for one another, then no one gets hurt” 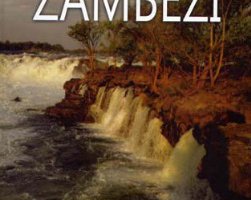 Fascinating memoir for the great Zambezi