A quiet month on waterpoint maintenance as all pumps, panels, etc now functioning properly. Once a month I send a vehicle out with a ladder, knapsack sprayer and mop to clean the panels – total maintenance! We replaced the old pipeline supplying water to the hide at No 3 with a larger pipe, which has improved the domestic water supply there.

The new pan at Timots created by the elephants!

We pumped a record 3,285 million litres of water all by solar power in September, and the difference by adding the extra panels is very noticeable, with the pans filling up. It is anticipated the rainy season will give the pans a boost (hopefully fill them up) and the solar units will then maintain the levels.
The elephants have taken it upon themselves to redesign Timots pan – the original pan is bone dry as the ele’s have created a new pan on the opposite side of the drinking trough! 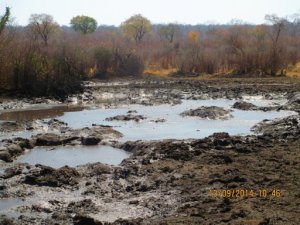 Another view of the mess created by elephants at Timots

Of extreme concern however is the number of elephant droppings we are finding in thelower Chamabonda River area containing plastic bags and even bottles!! The elephant are raiding the council rubbish dump and ingesting all this foreign matter. There is an urgent need to fence off the rubbish dump, and in fact, the township of Mukhosana, where there is conflict between humans/elephants.
Some sad news is that we found a young elephant bull that appeared to have been poached with a light weapon near No 3. We are not sure of the full circumstances yet, and Parks are following up.
I took a helicopter flight up and down the Zambezi River section of the Park, and was impressed with the amount and variety of game seen. However, what was very apparent was that much of the game was inland off the river, and thus out of sight of tourists. This emphasizes the need for an improved road network for access into these middle areas, which would improve game viewing, and also ease anticipated congestion in the Park.
Stakeholders of the Zambezi National Park requested a meeting with Parks to put forward any ideas, concerns, proposals that they had on the future of the Park, and to find out from Parks on any plans in the pipeline. Parks readily agreed to a meeting, and thanks to Victoria Falls Safari Lodge for the venue. The meeting was attended by Arthur Musakwa (Regional Manager), Edmore Ngosi (Area Manager), John Sithole (Senior Ranger) and Hilary Madiri ( Ecologist), and a good turnout of stakeholders. The meeting was held in a very positive, open and frank atmosphere, and there were some very good, positive proposals with issues such as roads, night drives, platforms, loyalty cards, operators access through side roads, more local camp sites, canoe operators sites, etc being brought up and discussed. A small team was tasked to look into all the issues and to bring to the follow up meeting with Parks what could broadly be  described as a “Stakeholders Park Plan”, for Parks to look at and hopefully assimilate into their Park planning. A big thanks to the Parks team for their open, refreshing approach, which can only bode well for the future of the Park, as everyone is pulling in the same direction.
One interesting proposal brought up by Charlie Hewat (who is following up on it) is that locals can buy a “loyalty card” which will allow them access to the Park without paying at the gate each time. This would particularly beneficial for fishermen. This would be an annual card, with a purchase value still to be decided on. It would save a lot of inconvenience all round.
One result of the stakeholders meeting was that between Bhejane Trust and Victoria Falls Safari Lodge, we managed to secure 2000l of diesel, and the motorized Zinara grader is already at work in the Park, grading the Zambezi Drive roads, which were particularly bad. Well done to Edmore for organizing the grader! 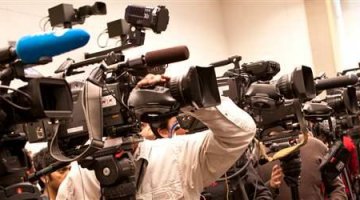