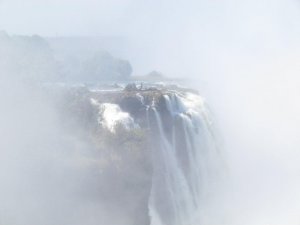 The Victoria Falls is Zambia’s and probably Africa’s highest visited waterfall all for its unique geological formation.

The water cascade which is Zambia’s only enlisted World Heritage Site has its own other uniquely hidden treasures “flora.”

According to National Heritage and Conservation Commission (NHCC), the custodians of the site the flora of the Victoria Falls and its rainforest is dependent upon the “water that thunders.”

“Tall trees, figs, palms and hanging vines, thick shrubs, creepers and a rich variety of flowers and ferns slide along the rain forests floor. The most significant tree species found in the rainforest are two species of waterbooms (Syzygium guineense and S. cordatum), a tree typical of the seasonally flooded margins of the river and which can be found with great frequency along the river above the Falls, and the red milkwood (Mimusops zeyheri),” NHCC states.

NHCC states that other tree species include the wild date palm (Phoenix reclinata), the hairy leaved Cape fig (Ficus capensis) and the strangling creeper (Ficus ingens) which eventually kills the tree on which it grows.

Other notable and more recognisable tree species include the large and striking African Ebony (Diospyros mespiliformis) with its straight trunk and dark bark, the Natal mahogony (Trichilia emetica) and the smaller African olive (Olea Africana).

However, these tree species are under constant attacks by elephants and only a few mature Mopane trees can be seen.

“However it is the ground-growing herbaceous flora which is of greatest interest to the botanist, with many rare and some even unique species adapted to the almost constantly saturated conditions. The early rains in November bring the spectacular ‘fireballs’ (Haemanthus filiflorus and H. multiflorus), with their large round globes of red slender flowers also known as ‘red hot pin cushion’ which can easily be seen with a visit to the Livingstone Island,” NHCC states.

There is also the national flower of Zimbabwe, the Flame Lily (Gloriosa superba), a shrub layer creeper with red and yellow flowers.

“Ferns, notably the maidenhair (Adiantum capillus-veneris) and the near endemic Cheilanthes farinose, with its striking sulphur yellow under-surface to the fronds, can be found throughout the rainforest area at any time of year. The latter species is also of note as it is known only from the vicinity of the Victoria Falls and a couple of nearby sites upstream,” NHCC states.

NHCC adds that the vegetative flora of the Victoria Falls region is determined by two main factors, climate and soil type.

“The Zambezi River flows over solid basaltic rock and basalt soils tend to be shallow and stony. However, to either sides of the Zambezi River basins are overlying reddish Kalahari sands which are often intermixed with the shallow basaltic soils. The Kalahari sands support Miombo/Kalahari woodland, typical of the region, and which is dominated by several species: Zambezi Teak (Baikiaea plurijuga), various species of Brachystegia, museshe (Burkea Africana), mubako (Erythrophleum africanum) and muzauli (Guibourtia coleosperma),” states NHCC.

The rain forest on the Zimbabwean side, which is under constant supply of water spray than the Zambian side, supports a variety of tree species, of which the African Ebony (Diospyros mespiliformis) is probably the largest and most striking, with its straight trunk, dark bark and alternate oblong leaves.

“Of the smaller tree species one can find the African Olive (Olea Africana). The second most common tree species is the Wild Date Palm (Phoenix reclinata), which together with the Waterboom and Milkwood species make up over 80 per cent of the total tree species in the rain forest,” NHCC states.

Pavetta cataractarum produces masses of tubular white fragrant flowers, and Hibiscus calyphyllus produces a large yellow flower typical of the Hibiscus family,” states NHCC.
NHCC adds that the spray from the falls particularly favours smaller moisture loving plants, especially the herbaceous ground flora which contains some of the rare and unique species to be found in the rain forest.

“Throughout the year, it is possible to find flowering examples of the bright yellow flowered little Gentian (Sebaea barbeyana), the blue flowered Lobelia spp and the bright mauve flowers of Nesaea floribunda. In December the ground orchid Calanthe corymbosa develops its large white flowers, the wild gentian (Chironia palustris) adds its pink flowers,” it states.
However, a teething problem to both the Zambian and Zimbabwean authorities in the World Heritage Site is the an ‘alien’ (non-natural to the area) species, the Lantana camara.
“The plant was introduced from South America as an ornamental garden creeper, it is a highly aggressive species which out-competes the local indigenous flora, and without active management is overtaking large areas of the park at the exclusion of the natural species.
Another alien invader, the Sword Fern (Nerphrolepis cordifolia) is also of increasing concern,” NHCC states.

On the drier, more exposed, rock faces, tree species give way to plant communities typified by the Aloes (Aloe chabaudii and A. cryptopoda).

“Trees in the gorge are characterised by three species of paper bark tree, a group identified by their smooth papery bark which peels off the trunk in thin layers. The Paperbark Corkwood (Commiphora marlothii) is the most common, and is recognised by its velvety leaflets,” states NHCC.

On the rugged slopes of the gorge, NHCC states that favourable habitats of two rare and localised tree species which can be found being the Entandrophragma caudatum and the Propeller Tree (Gryocarpus americanus) .

Of the shrub species found in the gorge, Balaria matopensis is locally abundant on the upper slopes and is identified by its attractive blue flowers. 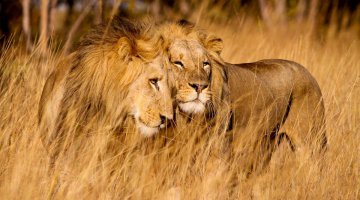 On Safari with Robin Pope