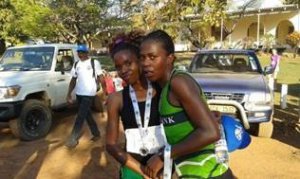 We had an exceptional event, the numbers of participants seem to increase every year.  I am still typing up the final results but it looks like a field of 140 half marathon runners (these being recorded finishers, although we had 184 entries) and around the 300 mark for the 10km fun run and walk (350 recorded entries). We did have some “no shows” on the day. Possibly  one too many beers on Saturday!

The winning time for the 10km fun run was a staggering 28 minutes by Open male runner Wellington Varevi.

The 21km winning lady, Constance Nyasango was from the Open category and came in 1.18.25 and placed 11th overall in the field which is no mean feat for a lady to be just outside the top 10 male athletes. 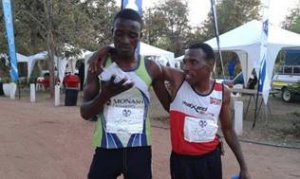 The winning male, 21km Open was Elijah Mabhuno in a new course record of 1.04.29.   Attached are the winning gents and ladies in the 21km event.

Some very impressive running.  We also traditionally have a children race and this year increased the age to 12 years and under and had 91 children compete.  So it really does encompass something for the whole family and I believe contributes to its success.  There were no mishaps reported to me along the route apart from some elephants causing a couple of minutes delay to a group of runners. We did have KAWFT and National Parks and marshals at hand, as well as MARS so of course it is still a wildlife area and coming across elephants is not unusual, but we believe it is safe (and exciting – has to be on ones bucket list).

Unfortunately I have had to step down as the Coordinator of the Kariba Half Marathon mainly due to having growing children who are now at school near Harare, and to concentrate on my second business.  However after the weekend I did have some very reliable and proactive Kariba residents approach me to say that they would be willing to form a committee and take over the reins. So the 2015 Kariba Half Marathon is most certainly scheduled and confirmed for the Heroes Weekend in August, and although I do not have an official 2015 calendar with me I would say it is likely to be Sunday 9 August 2015 presuming that the 10th and 11th will be the gazetted holidays.  Email address is karibahalfmarathon@gmail.com. 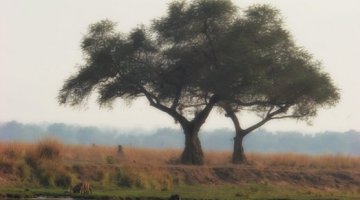