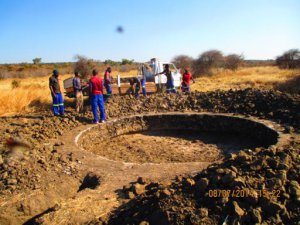 Zambezi National Park
This has been a busy month, with waterpoints, mowing and burning programs!
On Waterpoints :
Timot’s Pan was completed this month, with Kiggen Builders putting in the drinking trough. It is already getting good usage from elephant, buffalo, giraffe and zebra. I have erected an extra solar panel frame at Timots, and am awaiting four extra panels to install. Once installed these hopefully will increase the flow by over 50% (from our experience at Thomsons – see below) and this will create an overflow into adjoining pans. 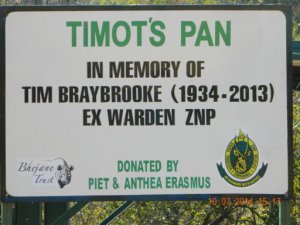 I am also going to install extra panels at No1 (have put in two extra now, but awaiting an extra two) and this will start filling the pan itself, not just the troughs.

At Thomson’s Pan, we installed a new bank of four solar panels. This has increased the wattage and amperage. It was wired up (after much deliberation and debate) with the help of some French volunteers from Planete Urgence. There was a very marked increase in flow, and the pan went from a holding operation ( inflow = seepage, evaporation and ele’s drinking) to starting to fill up. I also took a whole lot of sidagga clay dug out of the trough at Timot’s and lined the side on Thomsons Pan – the seal on Thomsons is poor as it has a lot of sand mixed in the clay, – and this way I hope to achieve a better seal.

The new trough filled and spilling into the pan.