Abundance Mutori was only 14 when he first got together with five other high school friends to make music. A decade later, the group known as Mokoomba, from the Victoria Falls area of Zimbabwe, is one of the most celebrated acts in African music.

The sextet was just midway through its first North American tour last week when Mutori took time out to talk about the band’s surprising rise to international prominence.
“It’s a pretty big experience for us coming to a new continent and a whole new audience,” says the bassist. “It’s been great to see how people enjoy our music.”
[youtube http://www.youtube.com/watch?v=99zR29lirsg?feature=player_embedded] Their big break came in 2008 when the group won a couple of regional contests to make it to Zimbabwe’s capital city Harare, where they took part in Music Crossroads, a competition that featured bands from all over southern Africa. That’s when Mokoomba surprised many to win the top prize, which included a recording contract and touring opportunities.

The band’s subsequent debut album was released in both Africa and Europe. But it was the followup 2012 release, Rising Tide, that finally brought them international stardom, placing them on many best-of lists before they were awarded 2013’s Best Newcomer Award by Britain’s Songlines magazine.

Making music is an everyday occurrence in Zimbabwe culture. As a child, Mutori witnessed his father playing bass in the neighbourhood church. He was lucky enough to get lessons from his dad and to borrow his father’s bass but his friends had a hassle just finding instruments to play.

“At school we only had a few percussion instruments, some drums and mbira (thumb piano). Then an old guy named Alfred Mjimba helped us out.”

The town’s elder bandleader came to the rescue and lent them instruments, giving them their first performance opportunities at local dances and hotels, though some members, including Mutori, were still too young to play the bars at first.

Over several years of busking and playing local tourist spots, the group would begin to develop their own sound, reflecting a range of styles from south and central Africa. On their Rising Tide album, you’ll hear the flavour of whirling soukous guitar riffs, percolating rumba percussion, and hints of international elements like funk and pop. It’s a hot, uplifting sound full of youthful energy.

“We come from Chinotimba Township, which is kind of a border town in Zimbabwe, just across from Angola, Zambia and Botswana so you hear all kinds of music there. We have tried to make sense of that in a style we call Afro-fusion.”

The name Mokoomba is a reference to the vibrant life and spiritual power of the Zambezi River, which flows to Victoria Falls, a metaphor of sorts for the varied streams of musical sounds that come together in the band.

As the former British colony of Rhodesia, Zimbabwe gained independence in 1980, and while that fact led to greater prominence for most tribal cultures, the Tonga people tucked into the far west corner of the country still represented a very small minority. Lead singer Mathias Muzaza has been helping to change that. Of mixed parents from Angola and Zimbabwe, he speaks and sings in six languages, helping to attract fans from around the region. Mutori’s bass and players on guitar, keys, drum set and percussion fill out the band. Everyone adds to the vocals.

Mutori explains that the lyrics to their songs revolve around common themes of everyday life in the region. They have deliberately chosen to avoid political themes, probably a wise decision given Zimbabwe’s turbulent politics and economic troubles, but they do address issues like the AIDS crisis.

“One song on our Rising Tide album is called Yombe, which means the day has come to attend to this crisis. It’s a message we hope to send to the young people especially. We want to take our own culture in a new direction.” 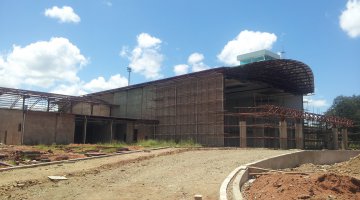