The Awards Ceremony for meritorious conduct by National Parks rangers and Forestry game scouts was held at the Zambezi Explorer jetty on 5th June.
The meeting was coordinated by Area Manager Edmore Ngosi, with AM (Robins) Midwell Kapesa in the chair on behalf of the Regional Manager, and AM (Matetsi) Victor Nqwebu was the MC. There was a good turnout of local operators, hoteliers and NGO’s, many of whom provided drinks and snacks for afterwards (thanks!!).
Edmore gave a welcoming introduction, followed by a prayer and the national anthem. The game rangers then gave a drill display, followed by a brief address by myself on behalf of The Friends Of Victoria Falls. The rangers/scouts were then all called up individually and presented with a SAVE Foundation Certificate, a National Parks Meritorious Conduct certificate, $200 cash each and a cap from African Albida.
Well done to these guys on doing a great job! Closing remarks and thanks were by Charlie Hewat of Environment 2000, with a final prayer by Catherine Hove.
A big thanks to all who contributed to making this event possible, especially Ian & Sue Thomson, Elephant Satib (Brian Courtney, Julian Freimond, Des Stephens, and Satib staff), WEZ Matabeleland Branch, Trevor Lane, Bud Cockcroft, Geoff Stork, Keith Vincent, Roger Parry, Victoria Falls Safari Lodge, Sue Archer, Chris Lampard, Shane White, Malcolm Pringle-Wood, Ketayi Zifudzi for donations. 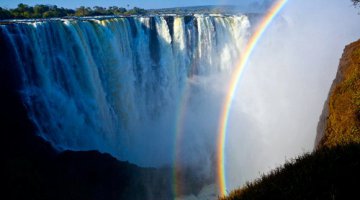 What is the UNWTO?