Chris getting up close with a desert chameleon.
(Picture courtesy of Chris Nel)

Chris Nel is a tour guide who runs the  Living Desert Adventure through the Namib Desert near Sossussvlei. On these tours he shares his wisdom and expertise with visitors. Chris was also involved in the establishment of the Dorob National Park in 2010 along Namibia’s Skeleton Coast.

We had a chance to sit down and chat with Chris about desert conservation and the role that ordinary citizens can play in protecting Namibia’s natural treasures.

How long have you been involved with desert conservation in Namibia? What made you decide to get into it in the first place?

I have always loved nature and always been interested in protecting it since a little child but in 2002 I started doing day tours in the dunes around Swakopmund. At that stage I realised that quad-biking had become the new craze of the nation and thousands of people were driving all over the Namib Desert just for fun. 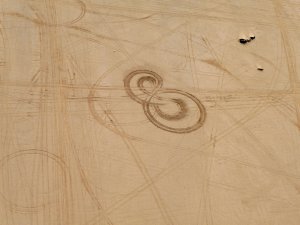 When Chris saw the damage he knew he had to do something to help.
(Picture courtesy of Chris Nel)

I attempted to run an educational tour for tourists and it was virtually impossible to do a quality tour because of the noise, aesthetic destruction (with tracks all over the place) and the little creatures we were showing people were getting killed under the wheels of the quads and 4×4 vehicles.

The year I started doing tours out of Swakopmund I realised Namibia had a big problem in the coastal Namib, largely caused by quads and 4×4’s. I did a flight over the Namib to take pictures and videos of the state of the desert. It was this day that my heart broke- I saw one of the most destroyed deserts in the world.

What are the most important lessons you hope to impress upon the people in your tour groups?

What do you enjoy most about taking a guest into the desert for the first time in their life?

I love showing them from the beginning that this is one of the driest places on earth relative to rain, but because of the fog we have a certain degree of moisture that sustains a large variety of specialised desert life.

A desert adapted chameleon having a snack.
(Picture courtesy of Chris Nel)

I always start by telling them that because it almost never rains we will not see typical ‘safari’ wildlife (some tourists want to see lions and elephants no matter what part of Namibia they are exploring). I then tell them that the fog is made of micro drops and this means that on the tour we will only find micro elephants, bonzai crocodiles, and tiny lions.

The Namib Desert is an extremely fragile ecosystem, what do you think are some of the greatest threats to its survival and continuing biodiversity?

The Namib is very fragile, especially its gravel plains. When vehicles or quads travel on the gravel plains the tracks can last for hundreds of years. Dust and gravel form a crust with the humidity of the fog over hundreds of years. When the wind blows over these tracks, the dust comes out but the ridges of the tracks stay on the plains for just about forever. You can see where the Germans crossed the desert in 1880 in ox wagons.

I believe the aesthetic damage is of great concern as tourists and local Namibians don’t want to see their beautiful desert scared for life. I don’t think all of the animals are in danger but many get killed from off road driving.

Marks from the German settlers’ wagons from well over a hundred years ago.
(Image via Andy Cowley)

Can you tell us a bit more about your involvement with the Dorob National Park?

After seeing the destruction of the desert I started a petition that was signed by thousands of people who wanted to help. Then minister Leon Jooster decided to form the Coastal Management Committee (the CMC). The CMC brought together people from all different spheres of the community. By bringing together town councils, regional councils, commercial fisheries, tourism stakeholders, and residents of the towns of Henties Bay, Walvis Bay and Swakopmund.

After the CMC was established, Rod Brady (on behalf of Windhoek Lager) then managed to get sponsors from the World Bank to start NACOMA (Namibian coastal management). Through these channels we ended up establishing the Dorob National Park.

Helping with a project like Dorob was stressful at first. Things got even worse when we managed to ban the quad biking and I received death threats from angry citizens. This was despite expert conservationists like the late Dr. Hugh Berry saying: “The most destroyed accessible coastline in the world is found in Namibia”.

The truth is that we didn’t want to ban people from enjoying our dunes, but after it was made illegal to drive on the beach in South Africa there were simply too many people joy-riding over Namibia’s deserts. Steps had to be taken and access to the park had to be controlled.

The government zoned areas so everyone could enjoy this unique part of Namibia. So whether you are a tourist, an environmentalist, or a quad biker, you can consult the NACOMA website for more information on where you can do your thing. You can download the park’s rules and regulations here. 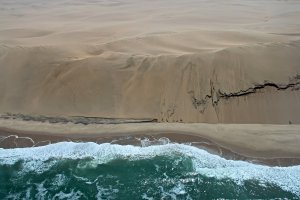 Namibia is now the only country on earth with its entire coastline falling into a national park.

Is there a way that people not already directly involved with a conservation organisation can get involved?

The best way for the public to get involved is through NACOMA. You can read their brochure on their website. You can also be a game warden in your own capacity – approach people who are driving off the road and hand them the brochure, stop them littering, and make sure they respect the area.

What part of your conservation work are you most proud of thus far?

I am most proud of my involvement in the creation of Dorob. Ten years ago everything was destroyed, it felt like mission impossible, but today it’s quiet, beautiful and flourishing again. Thinking back to all the death threats and stress I had to deal with, I still think it was totally worth it.

I am also proud of our country. It took a lot of years, tears and sweat but now our children can enjoy our hard work. The town of Swakopmund is within the area that has been declared a national park- several thousand people live in a national park, and that is quite something if you think about it. 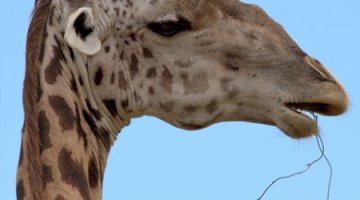