Both water based and land based initiatives have achieved tremendous results in March / April.

Our operative is now using one of the two pelicans very kindly donated to MAPP. The workhorse donated by the Tashinga Initiative is receiving a minor facelift before heading off to Tashinga where it will be based and used in anti-poaching operations in and around Tashinga, including the Ume River. The latter is suffering heightened fish poaching activity, probably as a consequence of our continued presence in the Eastern basin. Certainly the Zambian Fish poachers are now targeting this area and just last Thursday DPWMA together with MAPP arrested four Zambian fish poachers destined for this area.

Officially commenced operations 2nd March 2014
9th March 2014, arrested two persons with ivory on the periphery of the Park. One sentenced to 9 years, case remanded for accomplice
6th April 2014 Four persons arrested in two separate patrols on the Parks boundary, all of whom were in possession of Ivory. 2 sentenced to three years imprisonment, two remanded in custody to 29th May.

These arrests came on the back of a two week operation conducted by, DPWMA ( Investigations Department), ZRP, ZRP Support Unit and MAPP. We were privileged to be part of this operation and delighted to be able to lend much needed logistical support. By all accounts this operation has sent a shock wave through the poaching community, and there have been no new elephant carcasses discovered in the Park since then. That might simply mean that the poachers are not as blatant or
arrogant as they were not long ago when we were finding carcasses on the shoreline. The game of cat and mouse begins.

The MAPP fund raising event held in Kariba over the Easter was a great success. Whilst the primary objective was to raise awareness for MAPP, we were secretly hoping to make some money out of the event. We were successful in both departments and managed to raise $2600.00. We would like to thank all those who attended and gave of their support, we hope that you enjoyed yourselves, and very big thank you to the Kariba community who gave us tremendous support and assistance.
Our raffle tickets are out there and apparently selling well. There are still tickets available so if you have not yet had your arm bent , tickets are available at Billys meats and Master Angler. Alternatively e-mail me and I will be happy to assist you.

In closing I would like to leave you with a few inspirational pictures taken by Rae Koakes’ who is presently stationed in the Matusadona National Park on a lion research programme. Not much is known about the lions of the Park and environmental dynamics have changed substantially since the lake filled.
Prior to that the shoreline supported huge buffalo populations, the pantry for what was then known to be the second largest concentration of lions in the world. So what has become of the Matusadona lions since the lake filled, hopefully Rae can give us the answers to those questions. Early indications are that they are alive and well….

Next post Children in the Wilderness takes off in Maun 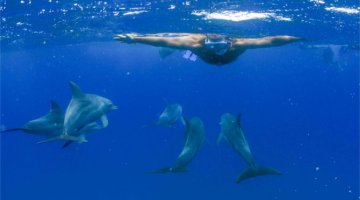 Swimming with Wild Dolphins in Mozambique