On Saturday 10th May, Game Rangers International (GRI) and the Zambia Wildlife Authority (ZAWA) successfully relocated an adult male elephant from the Nega Nega area of Mazabuka District to the Kafue National Park. The operation was supported by the International Fund for Animal Welfare (IFAW) and generous members of the Mazabuka community and implemented in partnership with Matobo Vet Centre and African Wildlife Management and Conservation.

The elephant was a 20-year-old male who had been resident in the area for a number of years but had recently been raiding the crops of local farmers who requested that ZAWA relocate the animal. He was originally part of a trio of elephants that had reportedly moved to the area from the Lower Zambezi National Park.

Operations began at 0630 on Saturday morning and the elephant was first seen and darted at 0815 from a helicopter. The ground team then swung into action under the watchful eye of Dr. Ian Parsons and the ZAWA Vet Dr. David Squarre. The sedated animal was lifted onto the back of a crane truck and then carried to the larger transporter truck where it was resuscitated prior to departure.

Many of the members of the affected communities had turned out to witness the relocation and were happy that the animal was moving to a new home rather than being shot.

A convoy of vehicles set off to travel the 450km to the Kafue National Park where the elephant was released from the transport crate at 1900, heading straight into the forest where it is hoped he will enjoy a long and peaceful life in the magnificent Kafue National Park. The whole operation lasted just over 12 hours.

This exercise illustrates the increasing issue of Human Elephant conflict in Zambia and while this operation was a success, it will not always be possible or appropriate to relocate so called ‘problem’ animals of any species. Working with our partners, GRI is looking at new ways of managing and mitigating Human Elephant Conflict in the Kafue National Park. For more information on this and other GRI projects in Zambia, please visit our website or email info@gamerangersinternational.org 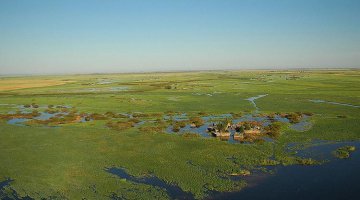