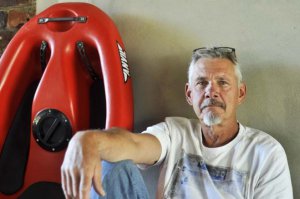 A 62 year old South African adventurer Louie Greef with his self designed board, 30 April 2014 at his home in Auckland Park. He is planning to swim the length of the Zambezi river, braving crocodiles, hippos, treacherous whirlpools and sharks for the second time. Picture: Valentina Nicol

‘The tribes people came out to see this mad man in the river, to meet me and shake my hand. There was a lot of support the last time I swam the Zambezi – and I hope for even more this time.”

These are the words of 62-year-old extreme adventurer, producer, author, survival expert, wildlife specialist, travel guide, 4×4 and motorcyle expert and humanitarian Louie Greeff, who, after becoming the first man to swim 2 300km down one of the world’s most dangerous rivers as a sprightly 48-year-old in 2000 – with a broken finger on each hand – plans to do it all over again in July this year.

The feat earned him the nickname “Mad Man”, after spending 12 hours a day on a specialised swimming board for the better part of three months in the river before finally reaching the Indian Ocean.

The allure of completing a world-first played a big role in the well-traveled, adrenaline junkie’s decision to attempt it 14 years ago – but the documented feat also served to raise awareness of flooding and the spread of malaria in Africa.

That the river is infested with crocodiles, hippos, snakes and man-eating Zambezi sharks, has extremely dangerous rapids and is flanked by lethal land wildlife, was a minor deterrent for the determined adventurer then – and is even less of a deterrent now as he hopes to revisit places of interest from his last excursion.

“I came out of the river in Mozambique and the village people ran away. I was in my wetsuit, goggles and flippers with this massive beard. They thought I was a monster that had torn a little girl in half and left her body lying on the banks,” the Johannesburg resident said.

He recalls enduring extreme cold, the constant threat of attack in the water and having to sleep on a ledge, several metres above the surface of the river, after he was forced to climb the side of a gorge.

He also recalls a “close call” with a hippo when it emerged from below the surface, jaws open, right next to the unsuspecting swimmer.

“I put my hand on the lower part of its jaw and pushed myself away. With my flippers, I was able to out swim it.” Greeff said, eyes shimmering.

Seemingly fearless, Greeff said he did get “apprehensive” during the trip, but his focus on the ultimate goal – to prove it could be done – drove him to completion.

A film and land support crew will again accompany him in July to document the swim as part of a three-part documentary series, which will also highlight the plight of orphaned children, between the ages of 10 and 17, living along the banks of the river in Zambia.

“They have no food, medicine or clothing. They scavenge for food to eat, even though they plant vegetables for prison staff in Lusaka. The orphans served the last year of their five-year sentences there for selling marijuana to tourists – but if they eat any of the vegetables they go back to jail for another five years.”

“All have been raped and traumatised. Even though they sleep under makeshift plastic shelters, they are happy to be free,” Greeff said.

Orphaned himself at the age of four, the issue is one close to Greeff’s heart and one that he intends to continue working to alleviate.

Greeff has offered the swim as an opportunity for donors to raise funds for a charity of their choice, and is still looking for sponsors for two vehicles, an inflatable boat and outboard motor, satellite phones and airtime, GPS’s, clothing, food hampers, drinks and other outdoor gear.

Having signed deals with international networks, including National Geographic, Greeff anticipates the expedition will be broadcast to 1.3 billion viewers worldwide. 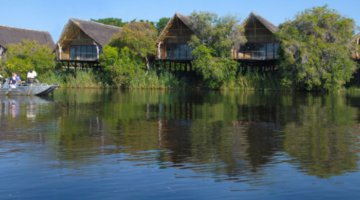