Malawi is a country I have long wanted to visit.  Images of green rolling hills, tea plantations  and a glittering lake so large it ranks 9th largest in the world , the allure of natural beauty and notoriously friendly people finally won over busy schedules and work commitments.

I flew on Malawian Airlines direct from Harare to Lilongwe.  An easy hour’s flight, arriving in Lilongwe late afternoon.  I was fortunate enough to have old friends living in the city, and enjoyed a fascinating, privately guided  tour of the widely dispersed town  the morning of my second day.

Lilongwe has existed for centuries as a small fishing village on the banks of the Lilongwe River.  In the early 1900’s the British designated Lilongwe as the administrative centre, due to its convenient geographical position.  From here the Lake, Blantyre, Mzuzu and Zambia were easily accessible.  Up until the 1930’s the population of Lilongwe remained relatively small, 5000 residents at its peak.

Malawi attained independence from British Rule in 1964, and Zomba became the Capital City.  President Hastings Banda decided to shift from Zomba back to Lilongwe in 1974. Whilst Blantyre remains the commercial capital, Lilongwe is steadily replacing it as the economic hub of Malawi.  Population levels have increased significantly with just under a million residents of Lilongwe projected for 2014.

Lilongwe is distinctly divided into a New and Old City. The New City has has hotels, embassies, shopping centres  and offices, whilst in contrast the  Old City has markets, bus stations, cafes and restaurants.  I found it particularly interesting to note that the drivers in Lilongwe are courteous and drive slowly, in stark contrast to other African cities. 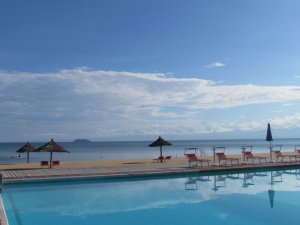 I left Lilongwe at lunchtime on a transfer to Makokola Retreat.  The drive is approximately 3 hours through rapidly changing scenery.  We turned off at Musasa, a steep and twisty road that  descends the edge of the Rift Valley.  We arrived at sunset, just in time for an ice cold Gin and Tonic, made from the famous Malawi Gin.  We sat on the beach watching the countless fishing boat lights bobbing far out on the lake, making a twinkling bridge across the horizon.  The soft crashing of the waves soon lulled us into proper “Malawi Mode”, a zone where time is of no consequence, just the here and now of being in a beautiful place surrounded by great people.

Makokola Retreat is run by Benedetto Calvani, thus a great emphasis on good food, wine selection and a soothing ambiance, in true Mediterranean fashion.  The lodge offers floodlit beach volleyball, floodlit all weather tennis courts, indoor soccer and squash for the landlubbers, as well as a full range of water based activities – snorkeling, wake boarding, knee boarding, waterskiing and speed boat excursions.  I decided to take a trip out to Boadzulu Island and enjoy some snorkeling in the bays.  The trip to the island is a quick 10 minutes by speed boat, and as we circled the side of the island, we  fed the resident fisheagles with scraps of bait.  Had I any photographic talent, I might have got some incredible photos, but I did get them on video, majestically swooping down in front of us, shrieking in excitement.  The snorkeling experience was superb, submerged in warm azure water with hundreds of cichlids – tiny, brightly coloured tropical freshwater fish, so curious and friendly, nibbling at my goggles and fingertips.  Lake Malawi is rather unique in Africa for having little to no hippos or crocodiles lurking in the deep waters.  It really was quite surreal to be swimming in a fresh water lake, without the threat of a grumpy territorial hippo, or a prowling hungry crocodile. 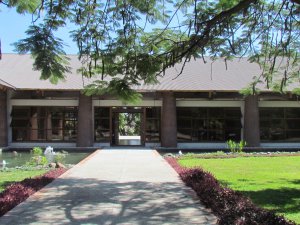 Makokola also boasts a state of the art conference facility, having just been completed this year.  Fully airconditioned, light and spacious, I would recommend this venue to any corporate looking for new options.  The furniture and equipment was due to arrive the week after I left, but having seen the attention to detail so far, I am confident this will all be of a good standard.  Its also worth bearing in mind that Makokola has its own airstrip, Immigration and Customs facility, saving on access time for the business traveler. 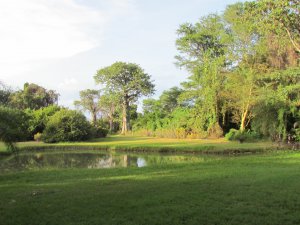 I had a tour of the golf course as well, just a 5 minute walk from the lodge.  Although its only a par 3 rating, the amount of water and thick bush makes this course particularly challenging.  Best to bring a large bag of “second” golf balls, and resign ones self to the loss of several of them.  The beauty and tranquility of the course will negate the frustration, and I suggest you establish generous “Mulligans” beforehand. 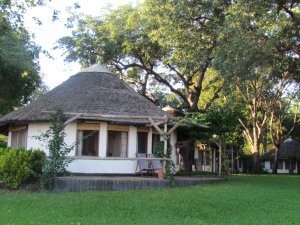 The lodges at Makokola do not have any glazing in the windows, just mesh to allow easy airflow through the chalets.  This proved to be very effective, as the  constant breeze off the lake kept the chalet cool and airy.  I loved the decor throughout the lodges, all made on site, sewn and hand painted by the ladies from the village.  It was homely, yet smart, each lodge interior unique in its design and colours.  Similarly the carvings and paintings throughout have been sourced from nearby Mua Mission, renowned for its artists.  The bathrooms are large and tiled in beautiful hand painted clay tiles, once again made at the lodge.

Inspired by the creations at the lodge, I decided to visit Mua Mission on my way back to Lilongwe.  It was well worth the extra time.  I met with Father Claude Boucher,

who took me on a full tour of the mission.  Father Claude has studied the people of Malawi at great length, and written several books on the history and culture of the tribes of Malawi.  He personally trains the artists at Mua, whether it is in oils or carving.  There is also a school for the deaf, a hospital and several other community projects that all stem from the mission.  Its a spiritually uplifting place that reaffirms the dwindling belief in the essential good of humanity, regardless of religious perspective. 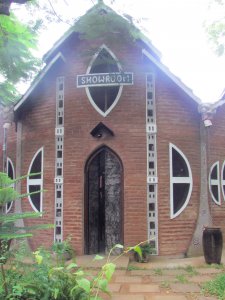 I only had three days in Malawi, which is definitely not long enough.  There is much to explore still, and now that I have seen the good state of the roads, I think we’ll drive and take a few weeks to really experience all that it has to offer. 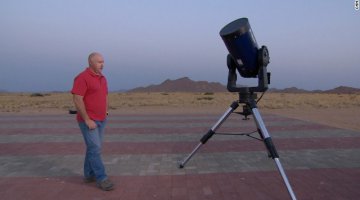 Stargazing in the world’s oldest desert