Flood Alert on the Zambezi

Thousands of villagers in the flood-prone Kabbe Constituency in the Zambezi Region are being advised to prepare themselves and their belongings for possible evacuation to higher, safer ground over the next two weeks should the Zambezi River continue to rise.

Kabbe Constituency Councillor, Raphael Mbala, who is the chairperson of the Zambezi Regional Disaster Risk Management Committee yesterday warned of the possibility of heavy floods should heavy rain keep falling in the Zambezi River catchment areas.

“It is raining very heavily. The river has risen. If it continues pouring down in north-eastern Angola, north-western Zambia and southern DRC, which are all catchment areas for the Zambezi, then we could expect heavy floods in the coming two weeks,” Mbala said.

Currently the level of the Zambezi stands at 3.6 metres. Last year at the same time it stood at above 6m high.

“People must prepare themselves to be evacuated to higher ground and those who have villages on the higher ground must start moving there on their own,” he advised.

When asked how ready is the Zambezi Regional Disaster Risk Management Committee in terms of logistics, Mbala explained they are more than ready. “We are prepared for any eventuality. We have our ferry ‘Kapelwa Kabajani,’ our banana boats and speed boats ready. It will only be a matter of requesting fuel from the prime minister’s office, then we can start our work. I have told people to be ready for any eventuality,” he stressed.

He also said that no school has yet been affected, and teaching and learning were still being done “as normal”.

Mbala said the committee would also soon start cleaning the relocation camps. “Soon our teams will go and check the situation at the camps such as sanitation and de-bushing,” said Mbala.

In March last year, close to 5 000 villagers affected by floods in the Kabbe Constituency were evacuated to various relocation camps on higher ground in the same constituency.

As roads become difficult to access, evacuation teams normally ferry villagers up to Mwandi border post in neighbouring Zambia from where the Namibian government trucks transport them through Zambia to the Wenela border post to the relocation camps.

The evacuation is expected to first start with learners, teachers and teaching materials followed by other community members and their belongings. 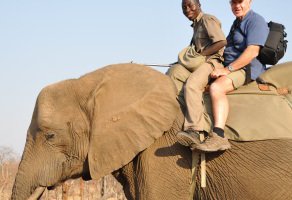