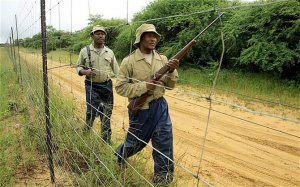 With a bullet in his rifle’s chamber and his hat in his hand – “if I have to run I don’t want to lose it” – Mmopi Tebogelo crawled through the dew-heavy grass towards the £300 000 prize lying in the open just 40ft ahead. A couple of squeezes of his trigger finger later, the two white rhino would be dead and their horns worth more than gold would be his, making him a very rich man.

Instead, Mr Tebogelo crept silently away, removed the round from the rifle that he carries for protection, and with his colleague, Gabriel Mpiping, noted the time and location of the sighting. The two men are wildlife rangers in Botswana’s Khama Rhino Sanctuary, where not a single animal has been poached since the reserve was founded 24 years ago.

Starting with four white rhino, it now has more than 30, has relocated 28 others to restock other areas, and pays its significant costs with tourist receipts instead of charity or government subsidies.

This week, world leaders gather in London for a high-profile summit on how to stamp out the illegal wildlife trade, with the backing of the Prince of Wales and the Duke of Cambridge. But success stories like the Khama Rhino Sanctuary will likely be drowned out amid the gloom and stark statistics of the current poaching crisis. Five to ten percent of Africa’s remaining 400 000 elephants are killed each year, raising the mathematical probability of extinction within a decade or two. In South Africa, a rhino was poached on average every eight hours every day of 2013. Only 25 000 remain in the wild. Prices for horn and tusk have never been higher, bringing international criminal networks into the trade.

That is why places like Khama Rhino Sanctuary can offer hope, and a model to follow. Similar small programs flourish in Kenya, South Africa, Zimbabwe and Zambia. ”Our number one focus has been to make local people aware that these animals are worth more alive than dead,” Moremi Tjibae, the sanctuary’s chief warden, told The Telegraph. ”If you poach a rhino, maybe you will benefit for today, and maybe tomorrow. If you protect it, everyone benefits, and their children, and their children’s children. All our schools and clinics, they are paid in part by money from tourists who come to see the animals.”

This is the “hearts and minds approach” to protecting Africa’s wildlife: winning local populations to your argument and demonising the poachers. Most conservationists favour it as the best long-term solution.

But in Zimbabwe, its shortcomings are made clear by Mike Dube, a ranger trained by the International Anti-Poaching Foundation (IAPF), which advocates for a paramilitary approach to confronting poachers. ”I’m proud of my job, but when I go home to my village, some people see me as the enemy,” he said. “Animals are something they find money from, even if just for meat. It is hard teaching people the value of protecting these animals.”

Damien Mander, the IAPF’s 34-year-old founder and a former Australian Special Forces sniper with a dozen tours in Iraq, is blunt about the softly-softly approach. ”Hearts and minds rolls off the tongue so neatly but it’s not yet worked, anywhere,” he said. “Meanwhile, we’re losing animals so fast they’re all going to be dead by the time we win over all these people. We need something happening on the ground, now, to stop the hemorrhaging, while the rest of the world talks about coming up with a solution.” He has brought the tactics and tools of the battlefield to the African bush: drones for aerial surveillance, night-vision scopes, ambushes, covert and overt patrolling, powerful modern weapons, intelligence gathering.

The British Army is training the Kenya Wildlife Service in similar methods. In South Africa, former SAS troops are doing the same with wildlife protection teams in private conservancies. Mr Mander’s perpetual show of force works. The last poachers to try their luck on the Stanley and Livingstone Private Game Reserve near Victoria Falls, where the IAPF is headquartered, were arrested three years ago. ”The three of them are now serving a combined 37-and-a-half years behind bars,” said Mr Mander.

Such successful prosecutions are rare. Evidence goes missing or is corrupted from the outset. Africa’s courts are overloaded, and many judges can be bribed. The maximum fine for poaching in Kenya was, until recently, £300. The Kenyans have just overhauled their Wildlife Act, significantly deepening punishments. Last month, a Chinese man found with 7.5lb of raw ivory was sentenced to seven years in a Kenyan prison or a £150 000 fine.

Still, “If you can’t handle evidence, or fill in a charge sheet, or take witness statements, even with good laws you’re pretty much screwed,” said Max Graham, the British head of Space for Giants, a Kenyan elephant charity. It has designed a handbook for judicial officials to lay out all the laws under which poachers can be prosecuted.

To some conservationists, jailing Africans caught with tusks, or pouring millions of pounds into drones or ranger patrols, or working to win community hearts and minds, is all fighting only one front in the war. Peter Knights, another Briton who heads the charity WildAid, argues that by souring the perception of ivory ownership or rhino horn use among those who currently pay so much for it, the demand will dry up.

“As a movement we’re putting a minuscule amount of money into this compared to the prevention side, the supply side,” he said. “We need to look far more closely at reducing the demand at the market end, where it’s sold.”