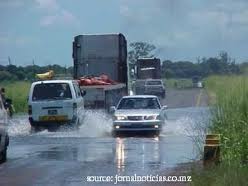 The Pungue river, in the central Mozambican province of Sofala, has burst its banks and swept across the road between Beira and the Zimbabwe border.

The river has invaded the road along a stretch between Mutua and Tica, in Nhamatanda district, about 80 kilometres west of Beira. This is an area that has frequently been flooded by the Pungue in previous rainy seasons.

Traffic has not yet been interrupted along the road, but on Wednesday the National Roads Administration (ANE) began signposting the critical parts of the road in an attempt to avoid traffic accidents.

The Sofala provincial director of transport, Elcio Kanda, cited in Thursday’s issue of the Maputo daily “Noticias”, urged motorists to drive carefully along the flooded stretch, and to avoid using it at night.

According to the latest hydrological bulletin, issued by the National Water Board (DNA), the level of the Pungoe, measured at the Mafambisse sugar plantation, has risen steadily since Monday. On Wednesday morning it stood at 7.94 metres, almost two metres above flood alert level.

The weather forecast is for a further 50 millimetres of rain in Sofala on Thursday and Friday, which will certainly worsen the situation along the lower Pungoe valley.

The Save river, which marks the boundary between Sofala and Inhambane provinces is also swollen, due mainly to heavy rains in Zimbabwe.

At the town of Vila Franca do Save, where the flood alert level is 5.5 metres, the river was measured at 6.02 metres on Wednesday morning.

At Mambone, near the mouth of the river, the river reached a maximum height of 4.6 metres on Tuesday – and then the rising waters submerged the measuring equipment.

“We have floods on the lower Pungue, in Mafambisse, and we are concerned with the Save basin”, declared Castro Junior, a spokesperson for the Central Regional Water Board (ARA-Centro).

The country’s largest river, the Zambezi, is above flood alert level along some of its middle and lower reaches, but the situation is not yet regarded as critical.

At Mutarara, in Tete province, the river has been rising steadily all week, and on Wednesday was ten centimeters above the alert level of five metres.

Hope for Save Conservancy