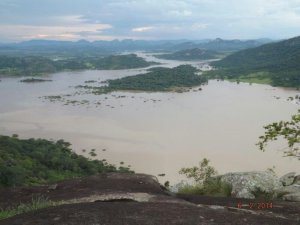 Construction of the Tokwe-Mukosi dam began in the early 1990s, but came to a halt in 2002 at the start of Zimbabwe’s economic woes. The dam was meant to bring relief to the drought prone Masvingo province. On completion, the dam should have been the largest in Zimbabwe, bearing in mind  Lake Kariba is “shared” with Zambia. Construction is estimated at US$200 million is expected to carry nearly 2 million cubic litres of water, and a flood area covering more than 9,600 hectares, larger than the nearby Lake Mutirikwe which has a total flood area (when full) of 9,100 hectares.  Construction  resumed in 2009, but experienced numerous delays and deadline extentions, when the heavy rains of 2014 caught up with the project, still incomplete.

A top South African based specialist dam engineer has studied the photographs of Tokwe Mukosi and has made these remarks. They are very technical but do convey the seriousness of the situation:

“Tokwe-Mukosi Dam is a concrete faced rockfill, or “CFRD”. This dam type comprises a rockfill embankment, with a concrete slab on the upstream face to create the impermeable barrier. The concrete face slab is generally constructed after the rockfill embankment is complete, or is at least well in advance, in order to ensure as much settlement as possible occurs before the concrete slab is in place. From the recent photographs of Tokwe-Mukosi dam, it is clear that the construction river diversion capacity has been exceeded, either as a result of a design for an unusually high risk, which has some precedence in Zimbabwe, or due to the extreme intensity of the flood that recently entered the dam. As a consequence of the upstream concrete face slab not yet having been constructed, the rising reservoir simply flows through the permeable rockfill embankment. 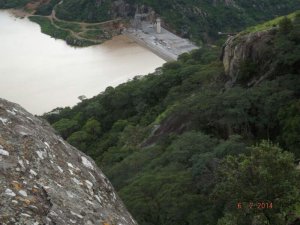 Arial View of the Wall

Although the rockfill embankment is normally structured to allow flow-through without damage, the expected flow is seepage, rather than a torrent. Furthermore, a subjective observation suggests that the downstream shell rockfill contains excessive fine materials, and consequently might be erodible, while a distinct pattern of the water emerging on horizontal surfaces is a typical sign that some of the fill might be less permeable than it should be. As long as the apparent situation persists, progressive erosion will continue and a real risk exists that the unraveling process could finally lead to the failure of the dam.” In separate comments the same engineer has advised that even if the “progressive erosion” is stopped and the dam is saved the wall will have to be rehabilitated which is going to be a very expensive exercise. 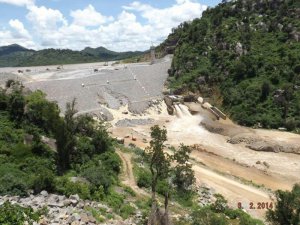 Water coming through the wall

Water, Environment and Climate Minister Cde Saviour Kasukuwere yesterday dissolved the Zimbabwe National Water Authority board after expressing displeasure with their response to flooding at Tokwe-Mukosi Dam, which has put the lives of over 60 000 people at risk. Minister Kasukuwere said this while presenting a ministerial statement on the flooding at Tokwe-Mukosi in the National Assembly.

The minister also said a team of five engineers had been appointed to conduct an independent assessment of the situation at Tokwe-Mukosi Dam, while others from the University of Zimbabwe had volunteered to assist. 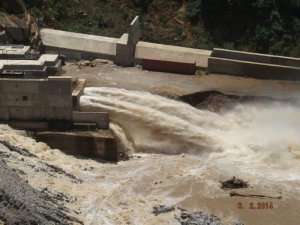 He added that a channel at level 680m which is above the river bed has been excavated to provide an additional water discharge outlet through the right bank spillway.

The dam is being constructed by Italian company Salini Impregilo with Zinwa as the project engineer.

The Wall after some erosion, but still stable

Over 60 000 families are in desperate need of assistance due to persistent rains and flooding in Masvingo and surrounding areas. Teams are working to relocate families and handing out food aid. The community of Victoria Falls is asking all stakeholders and residents for donations of blankets, clothes, shoes, food donations, medicine and funds. 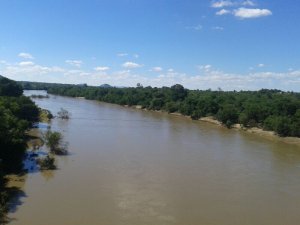 Please kindly submit your donations to the Jafuta Heritage Centre at Elephants Walk Shopping Centre. Jafuta Foundation Project has administrative offices in Victoria Falls who will hand over these donations, the Jafuta foundation is a registered foundation in Zimbabwe.  Contact Anne on anne@set.co.zw for further information. 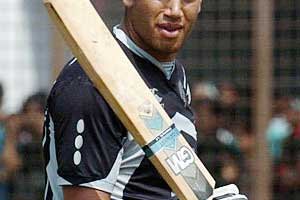 Cricket: Zim will be no pushover