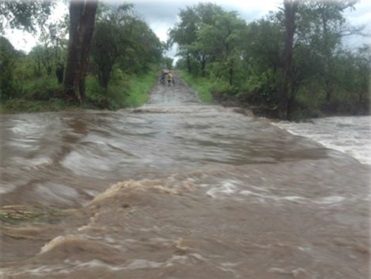 The Chamabonda River where it crosses the access road

Good, heavy rains experienced at beginning and end of month, with nearly 200 mm recorded in the Falls. The heavy rains caused the Chamabonda River to come down in a flash flood.
The first section of the Chamabonda was impassable after the rains, thought he top (vlei) section is accessible all year round.
The grass is growing quickly, and game viewing more limited – zebra, sable and buffalo mainly on the vlei 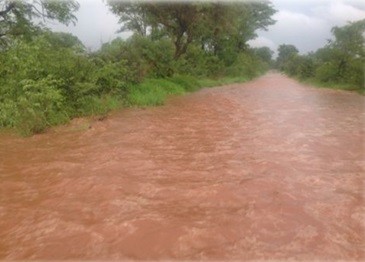 The roads on the river section in poor shape, and a plan made with operators and Parks teaming up to work on the main river road
Good game seen along the river for the month. 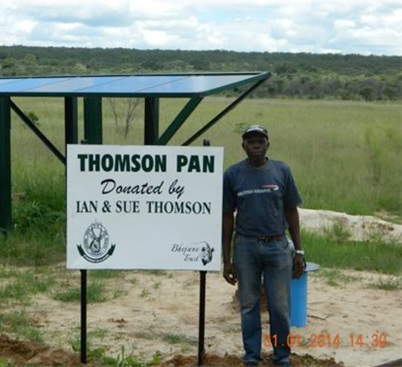 Meter installed on Thomson Pan. Was found to be delivering about 24,000l a day in general overcast conditions. Thanks to Chris Lampard on sealing the water trough.
Water meter now installed on No 3 – thanks to donation from Finn Allan.

SINAMATELLA
Report by Stephen Long
So far it has been a good rainy season. With 123mm falling in December and 142mm in January the Park is looking green and beautiful. The view from Sinamatella shows quite a contrast between now and the end of the 2013 dry season….

Over such a short time span the contrast is all in terms of colour but these photos are a trial run for a fixed-point photography project which we hope will eventually show any changes taking place in the vegetation over a longer term.
On the 10th and 11th we helped out with the national waterfowl count, counting at Masuma, Mandavu, Deteema and Salt Spring.

Our figures were strongly affected by the rains with a lot of birds being invisible amongst flooded grass at Mandavu and generally low numbers everywhere. With so much water available all over the Park, the birds do not need to gather in just a few places as they do in a bad year. For example I spent a few days on patrol in the Shumba area and we found water everywhere, along with many interesting water birds and we saw the same thing on a trip through the Park to Main Camp on the 23rd. By contrast we didn’t see much sign of mammals on either occasion and neither did we find the rhino
we were searching for on our Shumba patrol. Rangers have since located that particular animal many kilometres away in a completely unexpected place so it is no real surprise we saw nothing of her around Shumba – and once again I’ve been surprised at the great distances the rhino are willing to move for no apparent reason.

Whilst all the rain has been good in many ways, it has been a problem in others. Early in the month the approach to the bridge on the Sinamatella River Drive was washed away, completely cutting the road. Wilderness Safaris loaned their tractor so that rocks could be carried to fill the gap but it was soon obvious that the damage was too great and at the moment there is little prospect of repairing it, so the road is closed.

It might be possible to by-pass the bridge for a few months in the dry season but sadly otherwise this looks like being yet another lost road. Some better news of roads though, thanks to Wilderness Safaris and Camp Hwange who both used their tractors for the work, the main road to Shumba and most of the road from Sinamatella to Mbala were dragged to get rid of corrugations. Even better, at month end the Parks tractor was finally repaired after many months and it should be available for road works in future.

For the last week of the month we went to Bulawayo to organise some repairs for our hard-working Cruiser. Before we left we lifted the wind pump at Tshompani in the hope that we would find the fault and be able to source spares in town. The fault was easy to locate – a broken valve – but spares turned out to be a problem and no-one seemed able to help. Eventually a good Zimbabwean solution came up. While I was getting a gas cylinder filled, I noticed on the floor a scrap of rubber that appeared to be exactly right for repairing the valve. It turned out to be from the protective mat spread over his lap by a shoe mender working outside the shop. He was willing to cut and shape a piece for me and for a dollar I got exactly what we needed so we’ll re-fit the pump in February and all being well it will pump for the first time in nearly two years. As usual, Tshompani is looking a little disappointing in spite of the rain so every bit of extra inflow is valuable, even at this time of the year.

In reply to my article on Vulture restaurants, I got a response from Joe Holmes, reproduced below. Some very valid points, especially for South Africa.
“The reason for my mail though is to offer comment on the vulture restaurants which you invited, as to whether or not they were  becoming too reliant on human benevolence and were not performing their natural function of cleaning up in the wild. It’s an interesting question, and caused me to spend some time thinking about it over a few days, leading up to this point then of wishing to offer constructive comment.

I think firstly we need to stop thinking about the wilderness areas as being natural anymore, and on consideration of the criteria as to what constitutes natural I consider this to be an area of natural boundaries only, not impacted on in any way by man, ie ocean on the west to ocean on the east for terrestrially  based and oriented species not of a marine nature. Clearly, in todays fragmented world of patches of natural areas, notwithstanding the fact that some of those may be geographically quite large, there are no proper pristine natural areas left. In the  case of vultures which are highly mobile aerially, this is particularly true, and significant, but more of that later.
As you mentioned, Vultures primarily cleaned up in the veld, eating anything that had died, and this is not just the remnants from kills. Their breeding season is predominantly in the dry season, when local migrations of herdCanimals would produce a steady number of dead stragglers, providing a relative abundance of food for rearing chicks. Those conditions now seldom prevail, as within demarcated conservation areas the movements of game has been severely restricted, as for instance, in the fencing off of large tracts of Botswana leading to the demise of the big herds of zebra and wildebeest that used to embark on these local migrations. Then, secondly, the encroachment of human dominated areas into and surrounding the habitat of vultures has also severely curtailed the availability of free food. The  pressure on the small surviving populations (bear in mind that in West Africa vulture populations have declined  by 90%) even if they still “look” reasonably healthy to the casual observer, is high. Consequently, the answer then to your question of whether or not Vulture Restaurants are a good or bad thing answers itself quite succinctly : anything that helps ensure the survival of the species in the current environment is beneficial and should be continued. They becomes a tool to employed in the management of these birds, and should be encouraged where ever possible. And in exactly the same way as they would react in the wild, if one source of food dries up unexpectedly, their high mobility ability  will simply allow them to forage elsewhere and continue their struggle to survive.
So I hope you continue to support the restaurants, and keep on with all the effort and energy and time and money you have thrown into the conservation of the wild.
Cheers  time being my friend, Joe

Would the Victoria Falls Vulture Restaurants not be a perfect platform for a research project on vultures, to tie in with South African projects, which are producing some very interesting movement information? 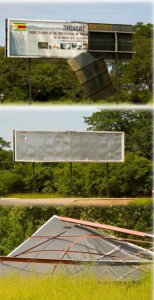 Food for thought! Victoria Falls has seen a proliferation of billboards around town.
These are often very tatty, and some have been erected in game corridors. The Victoria Falls council charges a very cheap (meaningless) rate for these billboards. Do we need this cheap and nasty intrusive advertising detracting from the naturalness of the Falls environment. Does a tourist really care about a telecoms company, a visa card bank, etc.?  Should companies not take a moral stance and not put up tacky adverts to the detriment of the tourist environment. Have environmental impact studies been done on these sites? Do big companies care about the environmental ambience of Victoria Falls? We cannot expect Harare billboard companies to worry about the unsightliness of the bill boards, but we would expect any company that cares about the image of Victoria Falls to take a stance.