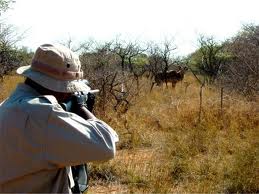 The Botswana Ministry of Environment, Wildlife and Tourism’s ban on wildlife hunting commenced at the beginning of the year, says ministry spokesperson, Ms Caroline Bogale-Jaiyoba. Ms Bogale-Jaiyeoba said the ban was on all controlled hunting areas or hunting management units throughout the country.

Hunting of allocated quotas had been taking place in many of these designated areas, but no quotas would be issued in the areas anymore, she said.

She noted that the decision to temporarily ban hunting was necessitated by the evident decline of several wildlife species in the country. “The causes of the decline are due to a combination of factors such as anthropogenic impacts, including illegal off take and habitat fragmentation or loss,” noted Ms Bogale-Jaiyeoba, adding that the countrywide aerial survey of 2012, and an analysis of trends since 1987, showed significant overall declines in particular of tsessebe, sitatunga, lechwe and springbok.

“Of particular concern, however, is the fact that all the surveyed species except elephant and impala declined in at least one protected area.”

She said this was noteworthy as protected areas were traditionally considered to be wildlife refuges. Ms Bogale-Jaiyeoba said no hunting licences would be issued with the exception of birds under conditions to be specified by the Department of Wildlife and National Parks (DWNP).

She, however, said game rangers would be allowed to hunt species classified as game animals that are confined inside appropriate fencing under the Wildlife Conservation and National Parks Act.

Ms Bogale-Jaiyeoba further noted that the Wildlife Conservation and National Parks Act prescribed penalties for anyone who hunted without a licence. The hunting moratorium also prescribes penalties for those who capture or hunt during the period of the ban.

She said the DWNP and other law enforcement agencies would intensify monitoring and continue to monitor the status of wildlife species during the ban and provide regular reports to the nation.

“The ban will remain in place as long as it takes to understand the causes of wildlife declines and for measures to reverse the causes of declines to take effect” she said.

Next post High Court Grants Injunction against Lower Zambezi Mine