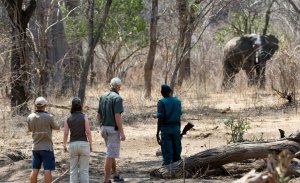 “We would firstly like to introduce ourselves, James and Charlene Bowden – the newbies at RPS, working as project managers in Liwonde National Park, Malawi. James the builder, and Charlene the Chiropractor, two adventurers who took that giant leap off the 9-5 treadmill only to fall into that “right time” and “right place”, in the middle of Malawi and started living the dream.
We take great pleasure in announcing the opening of the new, much awaited, Miyala Camp in Liwonde National Park in July 2014. Miyala, meaning “rocks” in the local Chichewa language, has been the most spoken word on site since first breaking soil in October last year, when we soon realised that one should merely embrace those hard “rocks” in life in order to move forward. Their natural grey hues have been drawn into the interiors, with huge external rock features marking the unique flares that only conceptual designer Neil Rocher could envisage.
Miyala camp is set in the South of Liwonde National Park nestled into the base of the Chiunguni Hill, with extensive views over the Chikalogwe plain and the meandering Shire River. With only four guest tents and a maximum occupancy of 10, one is sure to enjoy the full exclusivity and personal touch one can expect from Robin Pope Safaris. Each modern safari tent will comprise of a large open plan bedroom, lounge and bathroom, with its own private viewing deck and boasting evening breeze air conditioning  (state of the art and environment friendly cooling system for the bed within the mosquito net), freestanding baths and outdoor showers.
Miyala will have an exciting mix of activities on offer. Morning and evening drives will be available on a daily basis. Enjoy the morning flights of birds and a sunset over the Shire River plain. Or explore Liwonde on foot by spending the cool of the day strolling between waterbuck, sable and impala herds. Alternatively climb to the top of Chiunguni Hill and admire the spectacular views of the Shire River as it courses its way through the land in search of the Zambezi. Or wonder through the Mopani forests to catch a glimpse of the rare Lillian’s lovebirds. For a more relaxed game viewing experience one can meander up the Shire River for close up views of plentiful hippos and crocs, and await the arrival of the elephant.
Game viewing in Liwonde is exceptional with the largest numbers of elephant in the country, and the stretch of the Shire River that runs along the Park, said to have over 2000 hippos. The rhino sanctuary set up in 1992 within the park, has also successfully reintroduced black rhinos into the park. Other mammals commonly viewed include buffalo, sable, impala, waterbuck, bushbuck, nyala, kudu, warthog, yellow baboon, vervet monkeys.
Liwonde National Park is also renowned for its birdlife and has both a large volume of birds and great number of species including 400 of Malawi’s 650 bird species. Rarities include Livingstone’s Flycatcher, Pel’s Fishing-Owl, Spur-winged Lapwing, Lillian’s Lovebird and the Brown-breasted Barbet. Other birds seen in the park include Bohm’s Bee-eater, Palmnut Vulture, White-baked Night-heron, Pied Kingfisher, African fish eagle, Saddle-billed Stork and ground hornbill.
With only a short five months until opening we have plenty of work on our hands. However, we cannot wait to make this dream a reality and look forward to sharing it all with you.”
James and Charlene.
Thanks James and Charlene for sharing this with us. Looking forward to hearing more from Miyala as the year progresses. 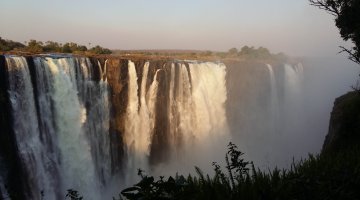