How do The Iguazu Falls compare to Victoria Falls ?

Upon seeing Iguazu, First Lady Eleanor Roosevelt reportedly exclaimed “Poor Niagara!” Vastly larger than North America’s Niagara Falls, Iguazu is rivalled only by Southern Africa’s Victoria Falls which separates Zambia and Zimbabwe (this is excluding extremely large rapid-like falls such as Livingston de Chutes and Boyoma Falls). Whilst Iguazu is wider because it is split into about 270 discrete falls and large islands, Victoria is the largest curtain of water in the world, at over a mile wide and over 90 metres (300 feet) in height (in low flow it is split into five by islands; in high flow it can be uninterrupted).

The water falling over Iguazu in peak flow has a surface area of about 400,000 square metres (1.3 million square feet) whilst Victoria in peak flow has a surface area of over 550,000 square metres (1.8 million square feet). By comparison, Niagara has a surface area of under 183,000 square metres (600,000 square feet). Victoria’s annual peak flow is also greater than Iguazu’s annual peak—9.1 million litres per second versus 6.5 million—though in times of extreme flood the two have recorded very similar maximum water discharge (well in excess of 12 million litres per second.). Niagara’s annual peak flow is about 2.8 million liters per second, although a all-time peak of 6.8 million has been recorded. Surprisingly, Niagara discharges the most water per year as its water flow does not vary greatly depending on the season[citation needed]. Iguazu and Victoria fluctuate enormously in their flow rate, and can almost disappear in the dry season. Mist rises between 30 and 150 metres (100 and 500 feet) from Iguazu’s Garganta del Diablo, and over 300 metres (1,000 feet) above Victoria (sometimes over 600 metres). 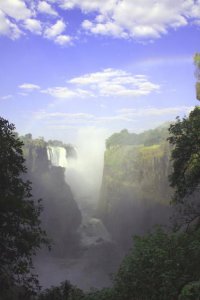 Iguazu, however, affords better views and walkways and its shape allows for spectacular vistas. At one point a person can stand and be surrounded by 260 degrees of waterfalls. The Garganta del Diablo has water pouring into it from three sides, which makes for an exceptional sight. Likewise, because Iguazu is split into many relatively small cataracts, one can view these a portion at a time. Victoria does not allow this, as it is essentially one cataract that falls into a canyon and is too immense to appreciate at once (except from the air). Iguazu and Victoria are generally regarded as the world’s most spectacular waterfalls, with people divided as to which is the more impressive.

As of July 24, 2006 a severe drought in South America has caused the river feeding the falls to become parched, reducing the amount of water flowing over the falls to be reduced to 80,000 gallons per second, down from the normal 350,000-400,000 gallons. By early December, the flow was back to spectacular, according to visiting tourists.