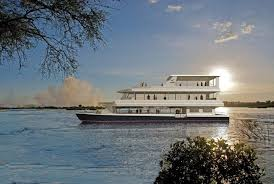 Young and energetic Karen Dewhurst joins the Zambezi Explorer Cruise Company as General Manager Intent to manage and promote the Zambezi Explorer brand and make it the preferred Zambezi   experience for cruise seekers.
Born in Zimbabwe Karen underwent Hotel Management Training at the American Hotel and Lodging Association from  2003 upto 2005  and worked under the Meikles hotel group during that time. She then moved to the Inn on the Vumba where   she worked as the duty manager   before proceeding to the United Kingdom to work in Administration at the Executive Offices Group in London.
Karen then proceeded to the British Horse racing Authority in 2008 where she worked as Office Manager for two years and moved to the Victoria Racing club in Melbourne Australia in 2010.She then proceeded to the Browns Courtroom Venue Hire in London in 2011 where she worked as Events and Sales Manager up to December 2013.
Outside the office Karen is an avid reader   who   basically devours any book she comes across and also confesses her loves for horses   and squash, Food wise the easy going and ever smiling Karen says she is just plain not picky and  will try anything put in front of her. And on her transition from the bustling freezing London streets to the calm scorching Victoria Falls town  Karen says she has  settled in  well  and is even not fazed by the zealous Zambezi mosquitos which gave her such a special welcome.
By :  Vainah Gumise Marketing Executive Zambezi Explorer 0772213688