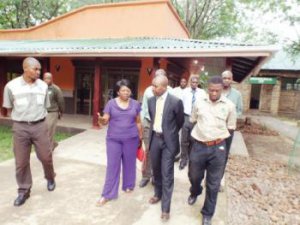 THE Victoria Falls’ conservation framework and the preservation of its universal values will undergo scrutiny during the World Heritage Committee session slated for Doha, Qatar, according to the National Heritage Conservation Commission.
The review comes on the backdrop of a 2007 threat by UNESCO to de-list the Victoria Falls as a World Heritage Site following plans by Legacy Holdings to construct two hotels, an 18-hole golf course and 450 villas on its Zambian side.
During the official opening session of the joint technical committee workshop to prepare the state of conservation report for the Victoria Falls at Livingstone’s New Fairmount Hotel on Thursday, NHCC executive director, Collins Chipote, said there had been a misconception that norms of world heritage conservation were not in favour of development.
“The Committee was a creation of a trilateral understanding amongst Zambia, Zimbabwe and the World Heritage Centre of UNESCO. Its main objectives are to oversee the conservation and development challenges facing the Victoria Falls World Heritage Site. This meeting is crucial in the sense that the site Victoria Falls is on the agenda during the forthcoming World Heritage Committee session to be held in Doha, Qatar,” Chipote said.
“The world would like to know how the site is being conserved and its outstanding universal values preserved.”
He said developments taking place at the heritage site must take into account the aspects of heritage conservation.
Chipote said the workshop was also considering the Strategic Environmental Assessment (SEA) report which provided for regulation of developments around the Victoria Falls World Heritage Site’s 30 kilometre radius.
And Chipote said Zambia and Zimbabwe will this year sign a memorandum of understanding on the management and conservation of Zimbabwe’s liberation struggle sites in Zambia.
Meanwhile, deputy traditional and chiefs affairs minister, Susan Kawandami says world heritage properties had become critical components of socio-economic developments.
Kawandami said the government places premium on the conservation of heritage resources due to the significant role they play in the social and economical development of the country.
“For developing countries such as ours, we need to ensure that the world heritage properties’ outstanding universal values are well preserved cannot be over emphasised. Studies have shown that the world heritage sites contribute positively to the state parties in terms of national identity and civic pride, regeneration of local community economies, partnerships, additional funding, conservation, tourism, learning and education,” said Kawandami. “My government believes that heritage should speak first to the communities and chiefdoms where they are found before they speak to the outside world.”

By Edwin Mbulo in Livingstone