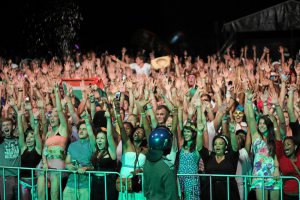 Mosi-oa-Tunya thundered with more than just the rain-swelled cascade of water on New Year’s Eve.

The Vic Falls Carnival, in its most recent incarnation, is the newest addition to an increasingly busy Zimbabwe festival calendar and is the first to be organised largely from outside the country.

The event has been revamped by Seed Experiences, the Cape Town-based event company behind Rocking the Daisies, We Are One and this week’s Bastille shows in Johannesburg and Cape Town.

A raft of new sponsors made this, its second year since Seed took root, bigger and better (though just as rain-sodden amid the summer showers). It appears that the country’s relative stability has reopened Zimbabwe for business, but what position does a South African-run festival hold in a Zimbabwean context?

Given the nationwide cash liquidity crisis, company closures and widespread formal unemployment, it isn’t the best of times to be living in Zimbabwe. But nor is it the worst, relative to the depths of the crises that have rocked the country in the past decade.

The tourism industry has bounced back better than most, and the Zimbabwe Tourism Authority announced a 17% increase in arrivals in the first quarter of this year.

Rather shrewdly, Seed Experiences has tapped into these opportunities; marketing for the festival included overland truck and train packages to get to the event from South Africa and a strong tie-in to Vic Falls’s adventure tourism.

The carnival began with a trip aboard a vintage steam train that took hundreds of party-goers to a secret location deep inside Zambezi National Park, where canvas tents, unique bush toilets and a line-up of DJs awaited them.

Persistent rain dented enthusiasm a little on the second evening, as the carnival kicked off under leaden skies at the Victoria Falls Farm School.

Local rock band Evicted were wholehearted in their thanks to the 30 or so people who left the cover of the food tent and bar and braved the rain to watch their opening set. They were followed by Mokoomba, whose roots are in Chinotimba township nearby but who fared little better in the precipitation.

The scheduling also wasn’t in Mokoomba’s favour. For such a stunning act, they were put on at least two slots too early.

But Blessing Chimanga, drummer for mbira-punk group Chikwata 263 who opened on New Year’s Eve, wasn’t too bothered by the scheduling, given the overall professionalism of the event.  “The organisation is just so over Zim standard and I’m happy for that,” said Chimanga.

“This is really a great platform to play on. I mean, it attracts over 60% of the crowd as international visitors so the exposure is good. Maybe they could have included more local bands from Zim for more local exposure.”

“But I personally have no problem with a South African company running the festival. They are bringing something fresh to Zim and are also setting a good standard.”

Criticism from other players on Zimbabwe’s festival and music circuits was also tempered by the potential positive impact of South African interest – provided there is a somewhat collaborative element.

“Musicians need more festivals,” suggested Chido Musasiwa-Gutu, festival director of Chimanimani Arts Festival – an event on the opposite side of the country, in Zimbabwe’s Eastern Highlands, and at the opposite end of the spectrum to the Vic Falls Carnival in terms of finance and sponsorship.

“The more festivals we have, the more platforms we open up.

“It is becoming easier [to stage events],” added Musasiwa-Gutu. “But it also comes back to how well connected you are or how much funding you can get.

“The interest [from South Africa] is phenomenal. But in one aspect it saddens me. Are we saying that we don’t have the manpower or the expertise to do this ourselves? A collaboration would be ideal – even if it’s musicians from there who spearhead the festival in conjunction with local acts.

“It’s not about wanting to monopolise and say we own it or whatever; it’s about who you put at the helm that makes a difference.”

Just Jinjer, the South African rock group now transplanted to California, headlined the festival on the second night, but it was on New Year’s Eve that the numbers swelled and the event came into its own.

Patrols of local policemen tapped their truncheons slightly ominously, but smiled when spoken to and even posed for photographs.

As the alcohol flowed, there was remarkably little trouble, though one of the MCs did mention between acts that: “The one thing that works really, really well in Zimbabwe is our police. So unless you want to spend New Year’s Eve in jail, please stop setting off fireworks.”

Beyond the main musical events, we were also encouraged to explore Victoria Falls town. Reminders of Zimbabwe’s recent past were ever-present as street vendors peddled old 100-trillion Zimbabwe dollar notes as souvenirs.

Though times are slowly changing, the political hangover of Zimbabwe’s troubles can still be felt, and both Seed Experiences and some of the artists have had to weather awkward inquisitions.

“I have no hang-ups about playing here,” insisted Loops. “I was asked some interesting questions about coming here: Don’t you feel like playing in Zim is like supporting Robert Mugabe’s regime? And: You know, as a South African band you need to have standards and fight against that stuff.

“It’s not about politics. I’ve had the most amazing experiences here, with just pure goodness most of the time. I just come here like it’s another place I go to and play music.”

Loops’s Greenpop organisation – a group of environmentalist activists and volunteers that runs a reforestation project just over the border in Livingstone, Zambia – and Seed Experiences have a “solid” relationship. Seed Experiences was a finalist in the Mail & Guardian’s future greening awards in 2012.

There was a noticeable green element to the Vic Falls Carnival. The “day of 1000 trees” planting exercise, facilitated by Greenpop, didn’t work out quite as planned but colour-coded recycling bins were dotted around the main arena and the Green Tent helped to spread an environmental message.

A piece by Powell Matsongoni included a number of press clippings, the largest and most eye-catching of which read: “The good, the bad and the ugly.”

“No matter how tough the situation in the country, I should be given the freedom to express myself, because that’s the only way I can market the story of Zimbabwe,” said Matsongoni.

“I should not be restricted to saying the good or the bad. At the moment, I see good things, good headlines about Zimbabwe. But as an artist it’s up to me to prove: Is it really true?”

Any company venturing into Zimbabwe to do business will have to deal with the good, the bad and the ugly. For now, though, the Vic Falls Carnival represents something that hasn’t been seen much north of the Limpopo for several years: opportunity.