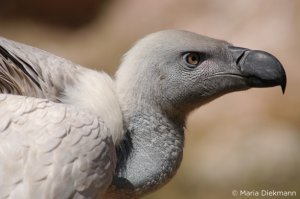 The Cape griffon vulture, Gyps coprotheres, living only in southern Africa, is perhaps an unlikely candidate around which to rally an international conservation effort. Yet this is exactly what the Rare and Endangered Species Trust (REST) is doing at its new centre located south of Otjiwarongo, Namibia.

Vultures
Throughout history, vultures have been revered as symbols of power and insight. Due to their ability to fly at high altitudes, many cultures believed and some still do, that vultures could reach the heavens and thus are messengers for God. Many respect their role of cleaning up the environment and preventing the spread of disease, possibly averting outbreaks of anthrax and botulism. In modern times, ranchers especially in Africa, watch the vulture to alert them to animals that have died naturally or possibly due to poachers.

Among the cultures of Africa, these huge, high flying birds with their well developed powers of observation have been specifically accorded with clairvoyance and mystical or magical powers. Unfortunately, that has led to a trade in vulture parts for traditional purposes and ceremonial and religious events. Nesting material is believed to have magical power and brings luck, the brain is used to help make predictions, feathers are used for magical power, luck and medicinal properties, and the eyes for the ability to see into the future.

Vultures have been called by many names – some negative – but the name angel does not often crop up.  Yet, this is an image that easily springs to mind on ones first encounter with vultures, perhaps as they drop from the sky in ever-tightening spirals, wind whistling through the tips of their outstretched wings, to land with a leap and a bound.  Then the fantasy is over as they jostle with one another around the carcass, hissing and cackling in waves of wings, feet, necks and beaks – fighting for their share of the bounty.  Nature in action – a case of survival of the fittest.

Why the Cape Griffon Vulture
Namibia boasts seven species of vultures, more than two thirds of the 11 species found on the African continent and one third of the world’s 22 species.  The most common is the African white-backed vulture, while the lappet-faced vulture, hooded vulture, white headed vulture, palmnut vulture and Egyptian vulture also occur in lower numbers.

Our flagship species for conservation, the Cape griffon vulture is also the heaviest species in southern Africa. Its wingspan is second only to the lappet faced vulture.  The Cape griffon is one of the most social of all vultures and nests in colonies high on cliffs.  During the 1950s, there were close to 2,000 individuals in Namibia, with a core population of 500 on the cliffs of the Waterberg Plateau Park near Otjiwarongo.

Today, less than 20 of this historical population survive.  What are the reasons for this catastrophic decline?

Causes of Decline
As efficient scavengers, vultures are extremely useful to famers, quickly locating and alerting them to dead stock.  By rapidly disposing of the carcass, they prevent the spread of disease to livestock.  Their efficiency may also be their undoing however, as vultures may fall victim to poisoned carcasses meant to control other predators like leopard and jackals.  A single poisoned carcass has the potential to kill hundreds of vultures.  A further danger is collision with overhead wires – this is especially true for young Cape griffons.

It is also believed that a drop in the number of carnivores in vulture foraging areas, due to farming and tourism, may have also resulted in bone abnormalities in vultures due to calcium deficiency. In the past, carnivores would break the bones into small fragments that adult vultures would gather for their young to feed on as a source of calcium.

Bush encroachment is a further problem in Africa.  Non indigenous species of small, thorny trees make it difficult for Cape griffons to spot carcasses, and once they do, they have a hard time tacking off with a full crop of food because of their high wing load (heavy body mass versus wingspan).

Due to the development of farming in the open bushveld, large herds of migrating game have been replaced by domestic stock and, coupled with the decrease in carnivores, and improved stock farming practices, this has contributed to a decrease in available food sources for vultures.

To learn more about REST or to schedule a visit, contact REST at rest@iway.na 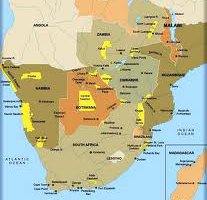