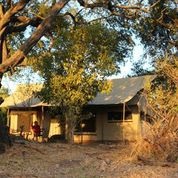 Our Tent at Pioneers Camp

New Year’s Eve in my limited experience, tends to waver between the high expectation of a great bash to end the year, and the vague feeling of anti climax once midnight passes.  So when the opportunity to escape to an entirely different New Year celebration, we jumped at it.  The 950 km drive between Harare and Victoria Falls has become a well known tedium in our family, however this trip it seemed to slip by faster than usual, the road blocks were less frequent, and the traffic surprisingly light.  Nevertheless, a ten hour drive is exhausting, and we were relieved to see the entrance to the Zambezi National Park, our last leg of the journey.  Our destination was Pioneers’ Camp, some 25 km upstream from the Parks entrance, nestled on the banks of the Zambezi River.

The rainfall in Victoria Falls was late in coming, but what it lacked in punctuality, it certainly made up for in volume.  It had been very wet during the last week, and we were not sure of the state of the roads in the Park.  The National Parks staff cheerfully announced we were definitely going to get stuck, as she handed us our receipts.  Regardless, we set off in our trusty Toyota (apologies Landrover peeps) engaged 4×4, and slowly trundled off.  At first it wasn’t too bad, a few sticky parts, but nothing of any note.  Light rain began to fall, of course coming in at a 45 degree angle, straight at the windscreen.  Coupled with that bizarre natural phenomenon, affectionately known as a “monkey’s wedding”, where it’s possible to have sunshine, yet it is raining, all at the same time, the driving experience moved up a technical notch.  The setting sun was directly in our eyes, making it quite difficult to see anything with the incessant rain and blinding light.  Once past picnic site 15, the dark cotton soil becomes more frequent and the roads take on the texture of molasses.  A previous vehicle had left yawning tyre trenches in irregular swirls, sucking our tyres down into the gooey mud, a squidgy vortex that would be impossible to extricate any vehicle from, if you allowed it to gain the advantage.  We slipped, skidded, squelched and swerved our way forward, often with the vehicle at a peculiar angle, whilst the steering wheel pointed in quite the other direction, but we made good progress, and we arrived in camp resembling a giant mud clog.  We were whisked off to our room to change into some dry, clean clothing so we could enjoy our first cold beer gazing over the river. 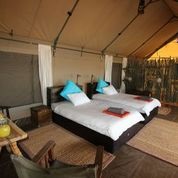 We had not known what to expect at Pioneers Camp, however we were impressed beyond any preconceived ideas we may have had.  Although the accommodation is a “tent” it is probably twice the size of an average flat in London, with all the niceties of a hotel room, yet you still have the impression of “camping”.  The enormous double bed has a spectacular view of the river, how deliciously decadent to lie in a comfy sandless bed gazing at the Zambezi River.  This is a mattress hog’s dream bed.  Should your better half resemble a catatonic starfish at night, rest assured you will not be disturbed, and in fact you could probably do the same and still have a reassuring plateau between you.  Same goes for those partnered to a duvet thief, if they manage to rob you of this size duvet, they probably deserve it.  I digress..

Pioneers has had a lot of thought put into it with regard to individual privacy, comfort and unobtrusive eco-friendly systems.  The lighting and hot water systems are all solar and very effective.  The tents are well spaced, each carefully positioned to maximise the view and utilize the shade of the beautiful indigenous trees.  The food was superb, the chef living up to the legendary “camp cook” status of being able to produce wonderful menu’s from a tiny gauzed kitchen, gas stove, limited storage and intermittent resupply of perishables.  All this, whilst shoo’ing off nosy elephants, sharply observant baboons, aggressive honey badgers and scavenging hyena’s. 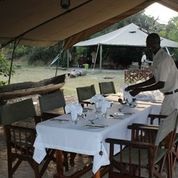 The rain did not abate, and thus our game driving excursions were curtailed, but we made up for it by embarking on long walks from camp, delighting in the chance to observe the little critters of the ecosystem, often missed out completely from a vehicle.  We were not limited to a deeper study of our many legged friends, we had wonderful sightings of eland, zebra, impala, kudu and a very exciting standoff between Mrs Buffalo, baby buffalo and four hungry hyenas.  Unfortunately for the hyenas, they had decided to take on members of a herd of 150 or more, so their chances were slim to begin with.  Four large buffalo bulls gazed steadily at the hyenas, almost urging them on, so the tussle could begin.  If you ask any veteran of the African bush, the cold, challenging stare of a lone male buffalo sends shivers down your spine and prickles your skin. The hyenas sloped off to find easier prey.

The fishing is never good at this time of year, as the river is swelling from the heavy rains upstream turning the water from greasy green to murky brown.  Dog determined persistence (well not me, I reclined on the boat, binoculars at the ready, dotting between my book and interesting bird sightings) eventually paid off and tasty bream fillets supplemented the food supply.  The limitless patience and enthusiasm of Chris the fishing guide, produced beaming fishermen, as he quietly revealed the secret spots in the hallowed estuaries of the mighty Zambezi. 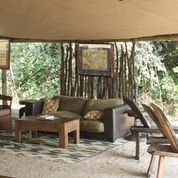 New Year’s eve began with a delicious meal of freshly caught fish and chips, washed down with champagne and our first glimpse of clear skies as a few timid stars twinkled between the heavy storm clouds.  The air was still and cool, with the sound of the rapids just downstream, soothing us into a slightly bush happy state.  The hippos grunted, bubbled and snorted, as the frogs chirruped, squeaked and whistled in perfect accompaniment.  The long suffering hyenas whooped around us, probably still squabbling about that juicy buffalo calf.

How glad we were at that moment that we had decided on five whole days in camp !  It is a quick escape from Victoria Falls town, yet you feel comfortably isolated in the bush, ensconced in luxury.  The change of year seemed a bit irrelevant when we looked at the incredible beauty around us, it’s been here for millennia, a mere 12 months is hardly noteworthy.  What is important though, is that we continue to return to such places to appreciate the wilderness that is left, in order to protect it for future generations. 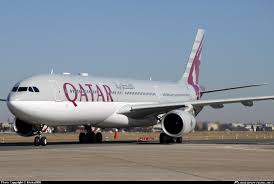 Qatar to fly into Zimbabwe