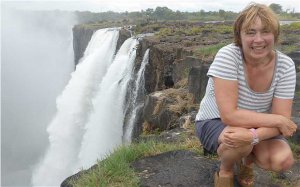 As I put my life in the hands of someone I had just met, letting him grasp my ankles as I lay peering over the edge of Victoria Falls, I did wonder whether 50 days of non-stop travel had finally affected my sanity.

Feeling the force of the Zambezi rushing past as I clung to the slippery rocks, I decided that if our guide Kelvin loosened his grip, it would be a headline end to my 50 at 50 journey. While this was the most exhilarating moment of my trip, climbing out of that current was also one of my happiest.

The roller-coaster ride continued as I was soon soaring in a helicopter above the Devil’s Pool that I hadn’t yet dried off from. The next second we were swooping through the famous gorges just feet above the swirling surf and within a knife’s edge of the cliffs.

Thermals buffeted us from all directions and a group of whitewater rafters waved as we sped by.

Our stomachs flipped as we rounded the bends until we stared face down yet again into the churning cauldron of rainbows and spray. A harem of hippos and one lone crocodile sunbathed in the shallows – I hoped we weren’t going to join them.

This was certainly a fitting way to experience one of the Wonders of the World and leave my 50-day global tour on a high.

It was appropriate to end my long road here, just as Zambia is about to celebrate its 50th year of independence in 2014 and for me to follow in the footsteps of the Scottish explorer who inspired my love of travel. I remember to this day going on a school trip when I was 10 to visit the David Livingstone Museum in the humble tenement where he grew up in Blantyre, near Glasgow.

I found his four-year trek across Africa, with his wife dying in his arms, lion mauling, succumbing to malaria, fighting for the abolition of slavery and having his faithful porters – Sussi and Chuma – risk their own lives to carry his body home absolutely riveting. I enjoyed the tale even more listening to Luke Terblanche relate it all again during a Historical Tour of the Falls, while hippos applauded with hearty “ha ha ha’s”, chuckling at their own jokes.

Just as David Livingstone’s heart remains in Africa, this very special continent has stolen mine.

Where else can you sit having dinner at a hotel as unique as the Royal Livingstone and watch wild zebras graze on the lawn?

Going on safari in Botswana, one of the safest and friendliest African countries, has to be among the top of my many highlights. At Pom Pom Camp in the Okavango Delta, I’d watched in awe as a couple of hippos wallowed into the lagoon right in front of my luxury tent. So they were responsible for the rumpus in the middle of the pitch-black night. Next an elephant lumbered by, grazing along the banks while a monkey cheekily threw fruit at me from a tree.

Two delicate Chobe bush bucks flirted with each other under my deck. They like to be near humans for protection.

No wonder. Out on a game drive we came across a lioness and her cubs as well as two male lions snoozing under a tree. I was relieved that they had eaten but was so glad to spot my first big cats in the wild – just feet away.

There are few fences in Botswana, so the animals are free to migrate as they have done for centuries. I found Chobe Safari Camp, close to the border with Namibia, also teeming with game, although the reserve had stricter rules and there was no off-roading. Watching a family of mongooses play ‘chase’ with a baby baboon was like something straight out of a David Attenborough documentary.

Even my one night in Jo’burg and Pretoria, “City of Jacarandas”, which were only just coming to the end of their lilac bloom, held special memories for me. I could have thrown a 50th birthday bash in the spacious and luxurious suite I was given at the impressively refurbished Maslow Hotel and I wish I had.

For my surprise dinner guest that evening was none other than one of South Africa’s most-loved superstars – singer and humanitarian Yvonne Chaka Chaka. The hotel staff almost swooned in her presence – and I hung on her every word as she told me about singing for Nelson Mandela and meeting Oprah, as well as her work as an Ambassador for UNICEF.

As my driver Nelson took me to the airport that morning past the very house where Madiba spent what turned out to be his final few hours, I declined the opportunity to take a photograph, feeling that it wasn’t right to intrude on the charismatic leader when he was so ill.

It was only round the campfire in the Botswana Bush – far away from any wifi or telephone signal – that I heard the sad news of Mandela’s final walk to freedom.

Now as I sip a Mosi beer for my last sundowner on my incredible 50 at 50 journey, the zebras make their evening promenade past my Royal Livingstone conservatory and the monkeys get up to mischief in the trees.

I can’t quite believe that a sensational seven weeks have flown by and I’m packing up to go home. Yes, I have my brand new passport now full of stamps as a souvenir.

But most of all I have a trunkful of treasured, lifelong memories that I can’t wait to share with family and friends. 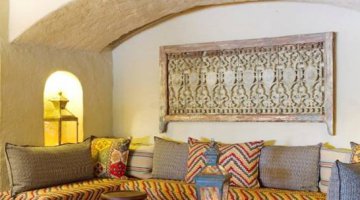