The Namib Desert Challenge is an extreme desert race, run in July each year.  The entry requirements are stringent, and due to the nature of the race, limited to selected  athletes who comply with the regulations.  Such an extended race requires extensive organisation, and with just 20 places left, if this race is part of your bucket list, enter now on Namibdesertchallenge.

We’ve extracted a brilliant descriptive of this year’s race from : Ultra-pegasus

“Ever since I competed at the Marathon des Sables (MDS) back in 2006, I have dreamed of running in many other deserts in this world. My experience at the MDS has given me the assurance that I have the capability to deal extremely well with high temperatures and difficult terrains (sand dunes). Unfortunately, due to my professional developments and commitments, it had taken me almost 6 years after MDS before I finally had the chance to participate in another desert race, this time the Atacama Crossing in Chile, which I competed in 2012.

I began to search for a desert race which will give me a more relaxing experience. I wanted to run a race where I can just concentrate on my running and be in the midst of stunning landscapes and different terrains, a race where I can have a nice shower and good food after every stage, in time to recover for the following day. I found that in the Namib Desert Challenge (NDC). Not only did the concept of the race fitted exactly what I was looking for, it happened to take place at one of my dream destinations, the Sossusvlei Namib-Naukluft National Park.

I promptly registered for the NDC without any second thoughts.

A few days before leaving England for Namibia, I checked the number of runners who will be participating at the race and I was rather disappointed to discover that there were only so few of us. I tried not to allow this disappointment to dampen my excitement. Anyway, by that time, I was already so looking forward to escape from my daily work routine to somewhere hot and dry!! I flew with my wife, Hannisze, from Manchester to Johannesburg via Amsterdam. The following day, we continued our journey to Windhoek, the capital of Namibia. 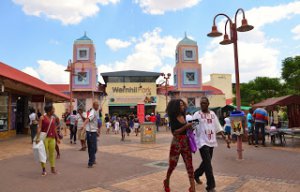 WINDHOEK:
We spent two nights in Windhoek (the maximum period of time you need to see all the highlights of the city) and the atmosphere was so relaxed that at times, we forgot that it was the capital of the country. Everything seemed to be happening on or around Independence Avenue, with pavement cafes and picturesque old buildings with German Architecture lining it, giving it a very European feel. There were no skyscrapers to spoil the horizon of the city and we were surprised to find many modern shopping complexes around, with the local middle-class people adopting the Western fashion and lifestyle.
On our first day in Windhoek, I ventured out from our hotel to find a trail to run. I headed first to the Parliament Gardens, a lovely spot with many locals picnicking around but I found it too small for a 60’ run. I continued running close to the National Botanical Garden and before long, I spotted a sign for a hiking trail!! Very soon after taking the trail, I found myself on the top of a hill which offered me 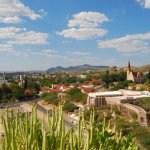 an amazing panoramic view of the city and a nice loop of 4km.

TRANSFER TO RACE VILLAGE :
On the following day, Sunday 24th March, we took a taxi to the meeting point at Hotel Thule for the bus transfer (provided by the organiser) to the Race Village.  Fortunately, as we were getting closer to the Namib-Naukluft National Park, the view became more interesting. We were greeted with spectacular views of the Naukluft Mountains. The name Naukluft means ‘narrow ravine’ which is apt for the landscapes of plunging cliffs. Over the millennia, rainwater has gradually cut into this massive range of mountains, dissolving the rocks and forming all the steep ravines we saw.

PRE-REGISTRATION AT SOSSUSVLEI LODGE :
We finally reached our destination, the Sesriem area, a plateau about 700m high, where the access gate to the famous Sossusvlei area is situated. We were first dropped off at the Sossusvlei Lodge where the pre-race registration and mandatory equipment checks took place.

RACE VILLAGE
For the entire duration of the race, we camped at the same location, which was a very well maintained camping ground managed by Sossusvlei Lodge. The location of this place was amazing. It offered us sweeping views across the vast horizons of the area with stunning mountains reaching out to the sky. Each competitor was allocated his/her own tent although in my case, I was sharing mine with Hannisze, which was fine for us because we are both so skinny!!
There is a pool at a neighbouring camp ground (about 500m away) where we can jump into after each stage to escape from the afternoon heat! About the same distance away, there is a petrol kiosk with a general store, selling the basic essentials and food and….(surprise, surprise!!!)…they also have 2 computers with internet facilities. Internet vouchers can also be purchased from the kiosk for the use of these computers and wi-fi on your own devices
PRE-RACE DINNER AND RACE BRIEFING:

After having arranged our bags and inflated our sleeping mattresses and organised our tents, we were transferred back again to the Lodge by bus. We gathered at the Conference Room for the race briefing and were informed of the rules and other important issues pertaining to the race.
Dinner was a full course 5-star buffet dinner, starting with a wide variety of salads, followed by endless portions of different types of game-meat which many of us have never tried before, and ending with mouth-watering deserts and fruits. All these, against the backdrop of a spectacular view of far-away mountains and purple-tinged sky with an almost full moon; I really had to pinch myself to confirm that it was real!

In a very clever way, the organiser has included the most exciting places and highlights of the area into the race route (not surprising, since the responsible person who started the planning of the race, Nel, has lived and worked there for the past 15 years!!!). By the end of the race, we had run through some very amazing areas which we would not even have the chance to enter even if we pay to do so, as they are located in reserved areas permissible to enter only by special permits. Another interesting aspect of the race is the organiser’s careful planning in ensuring that the runners are faced with different types of terrains (rocky trails/ dry river beds/sandy paths/ sand dunes/tarmac/canyons) to run on at each stage. I find this to be very important for me at stage races like this one, because by the time I reach the last 2 stages, I am always in need of some inspiration to urge me on, due to the accumulation of tiredness after having clocked so many hours of running. These changes in terrains, landscapes and sceneries certainly served as a big boost for me.

The high standards of utilities and comfort at our Race Village also played a big part in making this whole experience such a great one for me (clean showers and toilets with 5-star dinner every night). Of course, there was also the spectacular, magnificent, out-of-this-world, unique scenery (and the occasional encounters with wildlife!) which were constantly accompanying me throughout the duration of the race.

There was also the fact that after completing this, the countdown will start for my return to my daily routine and work.

No more magical sunrises and sunsets.
No more scents and visions of the desert.
No more sleeping in the tent, whispering with my wife and listening to the sounds of wild animals.
No more sand dunes.

It is surprising how easy it is for one to find happiness and satisfaction in so many small and basic things.”

Hope for Save Conservancy