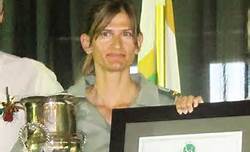 Birgit Kötting, the chief control warden of the Rhino Custodian Programme of the Ministry of Environment and Tourism, was announced conservationist of the year by the Namibia Professional Hunters Association (Napha). Kötting received the award yesterday at the 40th annual general meeting of Napha at the Sun-Karros Lodge in the Daan Viljoen National Park, from Napha president, Kai-Uwe Denker.

Denker paid tribute to the woman who has worked for more than 15 years in the bush with her base at the world-renowned Etosha National Park, focussing on saving the endangered black rhino from extinction.Her work in Namibia’s famous national park began in 1997, when she did park management at the three rest camps. In 2000 she began working as technician in the science section of the Etosha Ecological Institute at Okaukuejo and this is where her work with rhinos began. Being involved in the Rhino Custodian Programme established by the Ministry of Environment and Tourism, Kötting is one of a tiny minority of women who immersed herself in the tough job of assisting with the capture of rhinos designated for translocation under the custodianship programme.

In 2006 she took over the position as manager of this farsighted attempt to safeguard the future of one of the world’s most charismatic and endangered species and nowadays she is the liaison officer between the custodians and the chief control wardens.

“As such she, in the light of the enormous potential threat of rhino poaching, has a job where she has to be on standby 24 hours a day. She does all of this, living in the bush, capturing and translocating rhinos and co-ordinating conservation. I think hunters can appreciate more than others what it means in reality for a woman to live in the bush without amenities, at times without shower and toilet, to day in and day out be exposed to heat, dust,thorns and wild animals while at the same time having to raise children and attend to a family,” Denker said. 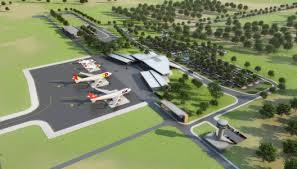