Latest news on Man Survives 110 m Plunge down the Gorge 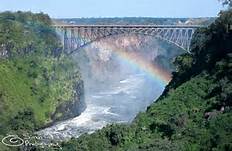 We have had the opportunity to get the latest news from Victoria Falls Bungi regarding the incident whereby a Chinese National fell down the Gorge two days ago. Wang Shun Xue was taking pictures in the second gorge, against the backdrop of the magnificent Victoria Falls Hotel and Victoria Falls Bridge, when the railing gave way behind him.

“The Clients name was Wang Shun Xue and he was in his mid 30’s and was involved in Kung Fu.

Him and his friend were taking pictures of themselves with the Bridge in the background, when the railing gave way.

His friend managed to maintain his balance, but Wang Shun Xue was not so lucky, and fell 15m down the cliff face, where he managed, by a stoke of luck, to grab hold of a tree and wait until he was rescued.

Vic Falls Bungee were alerted and were at the seen within minutes. A member of crew was lowered to the victim, where he was put into a harness by the crew member (Ng’andu Musako). Using a pulley system, both Ng’andu and Wang Shun were retrieved back to solid ground. 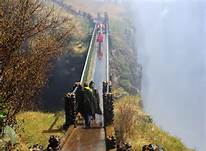 A MAN who yesterday fell into the Victoria Falls gorge, which is about 110 metres deep, was retrieved alive in what could be described as a miracle that left him shaken.
A combined team of Livingstone Fire Brigade, Zambia Police Service and Bundu Adventure yesterday retrieved alive the 45-year-old Chinese national who fell into Victoria Falls near the knife-edge bridge as he was taking pictures of one of the seven natural wonders of the World.
Southern Province Police chief Charity Katanga and Livingstone City Council public relations manager Emmanuel Sikanyika confirmed this in separate interviews.
Ms Katanga said Wang ShunXue, who was booked at Zambezi Sun Hotel, was retrieved around 09:30 hours with no serious injuries. He was taken to the hotel’s clinic for a medical checkup.
Mr Sikanyika said officers from fire brigade received a call yesterday around 08:23 hours that a man had fallen into Victoria Falls and rushed to the scene to rescue him.
The fire brigade officers worked together with State Police and Bundu Adventure, a company which conducts bungee jumping activities at the bridge, to rescue the Chinese national.
“From what they saw, the victim sustained some bruises and he was rushed for medical check-up and treatment.
“The Chinese national did not get to the surface of the falls as he was rescued at the edge of the falls cliff,” Mr Sikanyika said.
He urged tourists and other visitors to the Victoria Falls to follow guidelines to avoid such accidents.
A Times of Zambia crew that rushed to Victoria Falls yesterday saw Mr Wang walking out of the falls in the company of some Chinese nationals and other officials.
He had bruises on his hands and he could not withstand an interview as he was still in a state of shock. 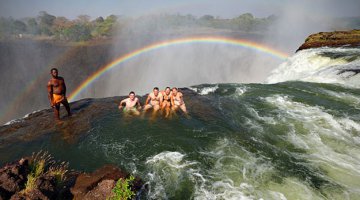 Taking a leap into Devil’s Pool