From the Painted Dog Foundation, Hwange
Makwandara Primary School is the newest school to be added to our free of-charge Children’s Bush Camp programme. All because of a goat!
In my last update I told the story of dogs killing a goat. Rather than seeking compensation or retribution for his lost goat, the villager, Mr. Nyathi, accepted his loss because he understood how PDC has helped his community at large with projects such as the HIV/AIDS programme and the construction of bore holes to provide fresh water. After hearing of Mr. Nyathi’s reaction, Forgie, Wilton, Jealous and I discussed how we could acknowledge his trust in us and how we could show our appreciation to the entire village. The unanimous decision was to invite his community’s school to become part of our world-class Children’s Bush Camp programme. Wilton followed all the necessary protocols and the day came when the PDC delegation arrived at the school to meet the Headmaster, teachers and parents. Mr Nyathi was guest of honour.Speeches were made by all and a certificate handed over as the formal invitation for the grade six children to attend our Bush Camp in 2014. We then arranged a familiarisation tour of our facilities for selected parents and village representatives. The excitement and enthusiasm was evident and a delight for all of us here at PDC to witness. This small moment in the life of a village represented a truly significant breakthrough for us. Shifts such as these, from attitudinal change to behavioural change, will help pave the way to a brighter future for the dogs.
Hwange National Park:
Life on the front line of conservation has many ups and downs. Many of you have become all too familiar with the sagas that have unfolded over the years, often captured in these updates. This year has been no exception. Earlier in the year I wrote of our ultimately futile attempts to save the life of the Kutanga pack’s alpha female, Ester. As I write this, the Kutanga pack is again in turmoil following the death of Shoulder Spot and the alpha male, BT, leaving only MK and Surf. But a ray of hope emerged recently when a new female, named Kerin, bonded with Surf, breathing new life into what we still refer to as the Kutanga pack. Four packs (that we know of) in the Hwange Main Camp area had pups this year. The highest number we have recorded in a long time. We cling to these glimmers of hope. . The Nyamandhlovu pack had ten pups, bringing the pack total up to 15. Currently, however, only seven pups survive with the five adults. One of the pups almost drowned in a concrete water trough but was fortunately rescued by a park scout. Surely an example, if ever there was one, that anything can and does happen to the pups and that the fate of the lost three is for speculation or a wild guess. Jealous saw the pack only yesterday and they are very fit and healthy. Our optimism for their survival remains high as calving season begins soon and will provide the adult dogs with a relatively easy and abundant source of prey to feed the hungry pups. Jealous is busy. He has recently tracked down the Broken Rifle pack, which had been sighted first at the Broken Rifle water hole during September and then again at Ngweshla water hole. This pack of seven adults and four pups is new to us and a real pleasure to watch. The elusive Kanondo pack spends most of its time in the Gwayi Conservancy to the East of us and, as a result, is rarely seen. A recent sighting, followed upon by Jealous, confirmed that the pack consists of four adults and five pups. This Sisele pack typifies the problems in Hwange. On average the pack sizes are still small and so pup survival is not great. The simple equation is that the more adults in the pack, the more pups survive. How the dogs are able to reach those magic numbers like we see in Mana Pools, where packs of 20+ exist, provides us with many sleepless nights. Still, we cling to any positive news, no matter how small, and for now we are celebrating seeing more dogs in and around Hwange Main Camp. Greg has spent time this year in the Sinamatella /Robins region of Hwange, which is to the west of us and indicated on the map. He reports seven packs there. He estimates the Hwange National Park population to be 30 packs numbering approximately 120 dogs. Fewer than would be expected in a National Park that is almost 15,000 square kilometers (5,700 square miles) in size. Still it is the best it’s been for many years, so it brings out that famous big smile of Jealous! Below is a map illustrating the approximate locations of the six packs in and around Hwange National Park that Jealous will search for on any given day. You can follow his daily Notes From the Field on our Facebook page: Painted-Dog-Conservation 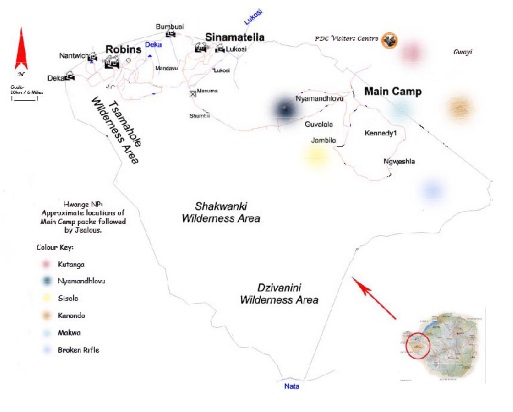 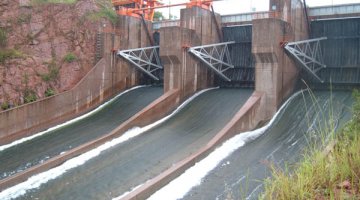