Rhino sighting in the Delta

Kwara’s the place to be in October !  Rare Rhino sightings, incredible predator activity, and a technically minded elephant..

The rarest, most unusual sighting this month at Kwara – in fact, this decade, was …. Rhino!
Seen twice in the Tsum Tsum area, a female and a large male square-lipped (white) rhino shocked a lot of our guides, more than their guests.  For all our guides and trackers, it was the first time in their lives they had seen these animals.  The first sighting – the rhinos took off before the guests could take a photo.  But two days later, all three cars that were out on drive managed to watch the rhinos and get photographs. Its wonderful news that these rhinos, re-introduced several years ago on Chiefs Island, have adapted well to life in the delta, even crossing deep water in order to get to the nice grazing area in Tsum Tsum.  Let’s hope they remain in the area and there is the pitter-patter of baby rhino feet to come!

The pack of wild dogs which denned at Kwara was seen regularly throughout the month, though they have lost three puppies and now have a total of seven puppies and eleven adults.  A pack of six dogs also came in to the concession, and were seen early evening at the beginning of the month walking alongside the airstrip.  A few days later, the bigger pack were also seen along the airstrip, and this time they managed to kill two impalas.  The next day, they killed another two impalas, but a hyena managed to steal one of the impalas from the dogs.  And just to be different, the next day, they killed another two impalas….

Lions were seen regularly this month, but unusually, three or four of the male intruders appear to have adopted new tactics in their hunting techniques.  Three times,  the lions killed adult hippos during the night.  It may be a circumstantial event as a result of the dry conditions: with little good grazing around, hippos are needing to spend more time out of the water and move further afield.  They are likely to also be in a weakened condition, waiting for the good grazing to arrive, and could be more susceptible to illness and attack from predators.

The two male cheetahs were seen in the Tsum Tsum area.  One has bad cuts to his face and leg, the result of fighting with two intruder cheetahs.  Everyone was quite concerned for his survival. However, the last day of the month, the two were seen again in Tsum Tsum, with the injured male well recovered and healthy.
A leopard was seen in the Honeymoon Pan area, resting up a tree, letting us observe him at leisure.
On the 10th, the pack of dogs came through Kwara camp hunting impala, and chased one impala straight into the lagoon in front of camp.  The impala attempted to escape by swimming to a far bank, but was soon grabbed by a large crocodile.

We also had a good sighting of three hyenas with two young – just old enough to keep up with the rest of the clan, rather than being left behind at the den.

Elephants are fascinating animals, and continually manage to surprise us.  One of the regular bull elephants that visits the camp, provided a lunchtime floor-show for the guests by playing with the fireside stools that are made out of palm trees.  He would push them over, roll them together then stand them up next to each other, then get another one, push it over, roll it, and stand it up again. It was the most bizarre behaviour we have seen in a while, but he seemed to be enjoying creating a little abstract art, or Palmhenge!

Although this was all the work of just one elephant, his compatriots have been in the Tsum Tsum area in large numbers.  A group of around 70 adult females with several young were seen drinking from the pans in the area.  This is several breeding herds that have come together to make use of the resources in the area.
Boat cruises have been excellent this month, with marabou storks nesting at Godikwe Island, lots of elephants crossing the water ways, and hippos providing their normal rambunctious floor show.  An additional surprise sighting by boat was a pack of six wild dogs, attempting to hunt red lechwe on an island.
We also managed to watch three eland drinking (a rare sighting of these shy animals) but with the addition of a roan antelope in the background!

If we are going to be visited at Kwara this month by such mystical animals as rhinos, there was no reason to not be visited by something else mystical: a tooth fairy.  Our trackers are renowned for their skills in hunting down elusive animals, but everyone’s skills were tested when a guest lost the crown of his front tooth through the deck of the room.  This was soon followed by two guests, two managers, a guide and a tracker under the deck, sorting through large amounts of leaf litter for some time, searching for the missing tooth.  The trouble with teeth, is that they tend not to leave many footprints.  Just as everyone was about to give up, sure enough, the tracker located the missing item, and garnered the honorary ‘tooth fairy’ 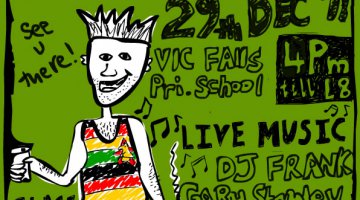 Prepare for the Barefoot Beerfest 2011!