John Maythem, a well-respected and locally renowned radio DJ, recently spent time at Elephant’s Eye, Hwange. He recently posted a great review on Facebook, and we thought it would be a fantastic idea to share this because it really gives true insight into what Elephant’s Eye is all about. His story starts in the paragraph below, next week we’ll upload his radio interview so keep your eye on our blog page!

What a wonderful and welcome surprise to find out that Hwange National Park is still one of the region’s great parks. The general perception of the state of Zimbabwe is so negative that one almost automatically assumes that everything in that country is on the skids. Not so – whatever one thinks of recent political developments in Zimbabwe (and I don’t think very much of them at all), there has been relative stability since the 2008 elections and five years of multi-party government, and there has been a slow, but growing, renewal in the country’s tourism industry. Vic Falls is not exactly booming, but it is considerably busier now than the ghost town it was pre-2008. The staff at the Kazengula border post are cordial and efficient, and the drive from the border to Vic Falls, and then from there to Hwange is on roads that are being well-maintained. Yes, there are roadblocks, and, yes, the police personnel manning those roadblocks are surly and probably corrupt, but if the driver and the car have the proper papers, as was the case with me, then they wave you on your way with your wallet untouched.

I was on my to Elephant’s Eye Lodge , newly-opened in August, and situated on a 6000ha concession just 3 kilometres east of the (unfenced)border of Hwange National Park(HNP), and about 30 minutes slow drive from the Hwange Main Camp entrance. It’s the first venture into lodge ownership and management by Jenman Safaris, started in 1993 by Garth Jenman, and built by him and his team into a highly successful safari travel operator over the last two decades.

The lodge is very stylish and elegant, with a cheeky but successful blend of traditional – wood and thatch etc – and the modern – exposed metal a la stripped New York loft. You relax and sleep in raised safari tents, which lack for nothing in terms of convenience and comfort. All eight tents overlook a savannah plain and a water hole, to which animals of all kinds wander for a drink day and night. There is a very special pleasure in enjoying an outdoor shower and watching about 50 elephants also taking their pleasure in the water just a few metres away. The staff has that inimitable blend of genuine warmth and efficiency that can make travel in Africa so pleasurable, and the food and general camp trimmings are all top-notch.

You can have a guided walk or drive on the concession, or take a trip through to HNP. I did all three, with great results. My guide on the walk was Roy Aylward ( www.facebook.com/wildwalks ) and he proved that the very high reputation that Zimbabwean- trained guides have is thoroughly deserved. His knowledge of the microscopic and the much larger is encyclopaedic, and his ability to tell a story on the basis of just visible strands of evidence was remarkable. It really was a master-class in the way the complex bush ecosystem functions. He told me that the Elephant’s Eye Concession is unique among the lodges outside HNP because of the diversity of habitats their area encompasses. That means you see a much greater variety of animal, bird and plant life than you would elsewhere. I saw elephant, buffalo, hyena, giraffe, zebra, wildebeest, kudu, sable, impala and jackal and heard, and saw tracks of, leopard. The bird life is also impressive. .

I went through twice to HNP in the company of the really superb in-house guide, Dollar. (As in Top Dollar, he quipped.) The park infrastructure looks a little faded, but everything works. The camp and picnic sites are very basic, but clean and looked after; the hides that are present at some of the water-holes are in good nick and offer excellent photographic opportunities of the constant hustle and bustle that is characteristic of waterholes in the very dry conditions of late October. In addition to large buffalo herds, staggering numbers of elephants and excellent general game, we had several sightings of lion, including a zebra kill, a mother and daughter leopard in a tree with an impala kill, and a cheetah. Dollar worked tirelessly on (largely successfully) finding me the bird species I wanted to see, and was excellent company as we travelled the road network. The tar has almost completely disappeared in places, and some of the dirt roads are quite corrugated, but there was no stretch that we did that I wouldn’t have been comfortable doing in my Honda Jazz. (Although that probably wouldn’t be true of the wet season.)

At one point we were in the area where at least 90 elephants were killed recently as a result of cyanide being thrown into a watering hole that is fed by a borehole pump. It is a disturbing development in the constant worry about poachers and their targeting of high-value species like elephant (and rhino in SA). I don’t know much about whatever political shenanigans might be present at the highest levels of the Zimbabwean Parks Authority. I can say that every Zimbabwean I met on this brief trip was absolutely passionate about conservation, and absolutely committed to the fight to keep the area and its wildlife safe and protected. It was really inspiring. And nothing was more inspiring than my visit to the Painted Dog Conservation Centre where volunteers supported solely by donations wage a truly magnificent battle to improve the lot of the wild dog population in the area. (They called it Painted Dog to get away from the negative connotations of the word ‘wild’.) They rescue, rehabilitate and release, where possible, back into the wild the animals that are snared or run over, and have a truly impressive education programme that is changing the way locals see this very special species. .

It was a thoroughly enjoyable four days and highly recommended, perhaps as part of an excursion that also takes in the sights and experiences of Vic Falls. And best of all is there is a special for SADC residents running until the end of 2014 that makes it affordable to a much wider spread of locals 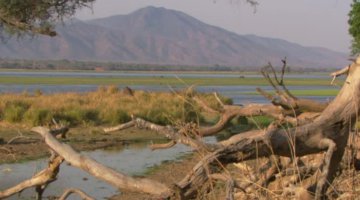